Speck seems to have the Samsung Galaxy S4 covered with four more new cases coming for it. As of now it seems Speck is offering plenty of choices if you need a case for your new Android phone with the CandyShell now available for GALAXY S 4, and the CandyShell Grip, SmartFlex Card and SmartFlex View to follow in the coming weeks. 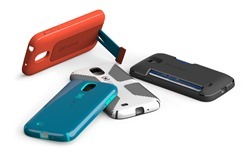 -Speck, one of the most well-recognized and best-selling case brands for today’s top devices, today announced its complete lineup of Samsung GALAXY S 4 cases and accessories. Each case goes beyond protection with slim-fitting designs and useful features that help you get more from your new smartphone.

Also announced today, Samsung has made Speck a part of its Samsung Mobile Accessory Partnership Program (SMAPP). As part of this partnership, the two companies worked together to bring several of Speck’s smartphone cases to the GALAXY S 4.

Speck’s hallmark CandyShell is now available for GALAXY S 4, with CandyShell Grip, SmartFlex Card and SmartFlex View to follow in the coming weeks.

Speck was founded in 2001 by a group of California-based engineers. We set up shop where Art meets Engineering, because we’re downright fanatical about design. Our eclectic team of inventors and color-lovers architect all of Speck’s products in-house, for well-crafted cases that complement your favorite gadgets, look sharp and feel just right. Our award-winning cases have captured the hearts of the press, the US Patent and Trademark Office, and most importantly, all the people who use their gadgets day after day. To learn more about Speck, drop by speckproducts.com