One for the gamers out there today…  Splitfish announces the Fragfx Shark 360 controller which is basically a mouse for your Xbox 360. I’ve always wondered what gaming with a mouse on the 360 would be like?! Not only can you use this with your 360 but it can be used on PC or Mac as well. It runs on 2AA batteries and supposedly can give you up to 50 hours of gameplay time. I don’t see a price mentioned though… Read the PR below for full details, but I think I want one.. 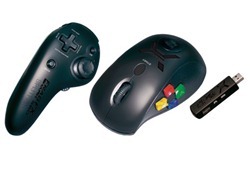 The FRAGFX SHARK 360 is a significant step forward for the console gaming industry because it not only provides an almost perfect PC mouselike FPS experience for gamers on the XBOX 360, but also provides an easy to adopt, high end, fully programmable analog stick counterpart that make it possible for hardcore PC FPS fans to enjoy their favorite shooters on MAC or PC.

The Splitfish FRAGFX SHARK 360 lets you play FPS games on a console the way they were originally meant to be played – PLUS MUCH MORE. With the FRAGFX SHARK 360 you can intuitively aim with a mouse and adjust sensitivity on the fly as well as use advance functions like button remapping, turbo, wrist flick melee and much more with ease. With Splitfish’s trademark lag free and highly precise one-to-one tracking  you get the maximum FPS experience and total immersion.

Please note – The FragFX Shark can be used on the XBOX 360 with ANY licensed wired XBOX 360 controller and yes, the headphones and chat are fully functional and can be used without any problem!

← Jabra Announces Two New Bluetooth Headsets for You Active People Out There
A Chance to Win ‘Rocketbirds: Hardboiled Chicken’ for PSN from Ratloop Asia →