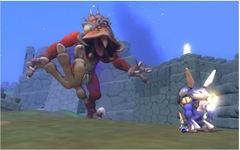 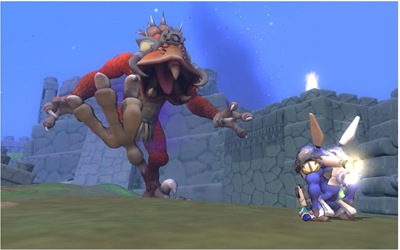 “Spore Galactic Adventures enhances the Spore experience by blasting players off into space, turning ordinary creatures into legendary Space Captains,” stated Lucy Bradshaw, VP and General Manager at Maxis. “For the first time, players can beam their creatures down to planets to experience all-new adventures or create custom-made missions of their own and share them with the world. With more than 105 million creations available in the Sporepedia, the Spore library of user-generated content for use in players’ missions, the only limit is their imaginations!”

Expanding on the original Spore game, Spore Galactic Adventures adds variety and fun by allowing players to get out of their spaceship and explore colorful, wacky new planets. Players will turn their creatures into space captains, battle epic monsters in intergalactic arenas and fight intense planet-side races. In each mission, players earn experience to rank up their captain and earn game-changing items such as the Plasma Pulser and Swarm Magnet. In the box, the game includes 16 off-the-wall missions as well as an “Adventure Creator” tool that players can use to design their own missions. These personally-created missions can be shared with friends online and can be classed in leaderboards that track accomplishments, rank and medals earned.

In addition to the adventures in the box, players can download ten all-new adventures created by the writers of the outrageously funny, pop-culture parody TV show, Robot Chicken. Available for free to all Spore Galactic Adventures owners, the Robot Chicken adventures take players through such wacky quests as a mission to obtain a library card by finding a ruler-yielding librarian her true love, and an adventure to save a princess by battling demonic snowmen in a snowglobe. Conceptualized by Robot Chicken co-creators Seth Green and Matt Senreich, the Robot Chicken Adventures were imagined by the show’s writing team including Matt Beans, Doug Goldstein, Mike Fasolo, Breckin Meyer, Dan Milano, Tom Root, Kevin Shinick, Hugh Sterbakov and Zeb Wells. With such a unique cast of imaginative characters, players can expect to experience missions with exploding poo, angry yetis, and banana wars.

To learn more about Spore Galactic Adventures or to download a free trial of the Spore Creature Creator, please visit www.spore.com. For screenshots or press materials about the Spore franchise, please visit http://info.ea.com.

Spore, available for PC and Mac®, gives players their own personal universe in a box. Create and evolve life, establish tribes, build civilizations, sculpt entire worlds and explore a universe filled with creations made by other gamers. Spore gives players a wealth of creative tools to customize nearly every aspect of their universe: creatures, vehicles, buildings, and even spaceships. Spore Creatures, available on Nintendo DS™, takes players on a quest to save their species and the entire Galaxy. Meet, befriend or fight other creatures in a number of unique Touch Screen-based activities. Available in fall 2009, Spore Hero, exclusive to the Wii™ and Spore Hero Arena for the Nintendo DS, catapult players into the role of a fully-customized hero creature fighting to save its planet.