For iPhone and  iPad only sadly as it looks like an awesome game. Vainglory is a MOBA or Multiplayer Online Battle Arena from Super Evil Megacorp that features 20-minute online multiplayer matches in which players across the globe battle it out in teams of three. 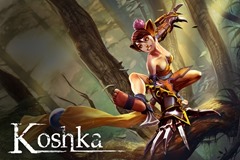 The LAN party is back! Super Evil Megacorp, a group of core-game developers that hail from the likes of Riot Games and Blizzard Entertainment, today launched Vainglory exclusively on the App Store for iPhone and iPad. Vainglory is the first game from this studio entirely focused on bringing core-gaming experiences to touch devices.

Vainglory was featured during Apple’s keynote in September, and it has already been praised as “Epic” by Cult of Mac and “the MOBA lover’s dream” by MMORPG. Vainglory is an unapologetically core MOBA that immerses players in a vivid world where they become powerful heroes with unique abilities. Built with Apple’s most advanced technology and the company’s proprietary E.V.I.L. engine, Vainglory brings a new class of ultra-high fidelity graphics and control responsiveness to touch devices.

“Vainglory is not about casualizing a core genre or making a direct port of an existing game,” said Stephan Sherman, Chief Creative Officer of Super Evil Megacorp. “To make Vainglory, we started from scratch to create that core MOBA experience — the highs and the lows, the build-up of anticipation, the sweet victory or bitter defeat. We want you to feel how it feels to play a core game — with the immediacy of touch.

“Vainglory opens up a whole new world of experiences in touch-screen gaming by playing together with friends in the same room, as a LAN party. While queuing up solo for online multiplayer games is fun and rewarding, the intensity of team play with friends around the table is incredible. Plus, trash talk. It’s like the LAN parties of old — except no heavy PC equipment required.”

Vainglory features fast-paced, 20-minute online multiplayer matches in which players across the globe battle it out in teams of three. Players become powerful heroes, each with their own lore and special abilities. More features and content are added to the game on an ongoing basis. Players experience intuitive, precision controls that effectively translate — and in some cases even improve — how MOBAs are traditionally played on PC.

Vainglory is available for free on the App Store for iPhone and iPad or at www.AppStore.com/vainglory.

For easy downloading, go to AppStore.com/vainglory.

For community-created hero guides and a comprehensive game wiki, check out http://www.vaingloryfire.com/.