I have to get me a Kinect soon, I’m not exactly sure why, but I want one. I think it’s because all the other cool kids have them.

Pop-music fans who are eagerly awaiting the debut of Lady Gaga’s new single at this year’s Grammy Awards will be able to dance along to the songs that made the musical superstar a household name as two of her biggest hits are featured in the new Dance Paradise™ video game from THQ Inc., which is scheduled to debut at North American retailers on Tuesday, Feb. 15.

“It’s perfect for a family gathering or a big group event where everyone wants to dance and laugh together.”

Available exclusively on Kinect™ for Xbox 360®, the all-new dance game includes top pop hits of the last three decades, including Lady Gaga’s “Bad Romance” and “Poker Face,” Rihanna’s “Disturbia,” and Gwen Stefani’s “Hollaback Girl” and “What Are You Waiting For.” Dance Paradise makes it both incredibly easy and fun to move to the groove of some of the biggest dance music hits of all time. Two players can dance alongside each other in Dance Paradise, and with the addition of the music videos for each song, the game turns any occasion into a dance party for all ages. 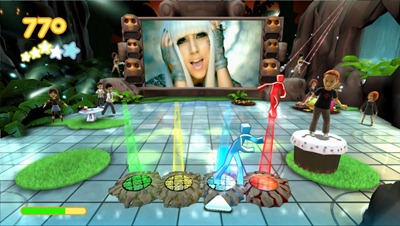 In addition to current hits, Dance Paradise also features such classics as Gloria Gaynor’s “I Will Survive” and Kool & the Gang’s “Celebration.” With fun, easy-to-follow dance moves that get the whole body moving, Dance Paradise lets everyone party together on the living room floor, whether they move like pros or have two left feet.

“Dance Paradise was created to be easy enough for kids to pick up, yet fun and challenging for teens and adults alike,” said Martin Good, THQ’s Executive Vice President of Kids, Family and Casual Games. “It’s perfect for a family gathering or a big group event where everyone wants to dance and laugh together.”

In Dance Paradise, players can dance solo or side-by-side with another player, as they attempt to mirror the movements of the on-screen avatars, and watch as their Xbox Avatar interprets these movements. Dance Paradise features a “Versus” mode, challenging players to replicate moves as accurately as possible before their avatars reach the end of four colored bars. The game includes 40 pop, hip-hop, R&B and disco hits — the most songs featured in a Kinect for Xbox 360 game — and also showcases original music videos from the artists. Players can watch the videos while they play or use “Video Box” mode that lets players watch the videos separately.

Dance Paradise is rated T for teen and is scheduled to be available on Feb. 15 in North America for a suggested retail price of $49.99.

More information about THQ and its products may be found at www.thq.com. THQ and their respective logos are trademarks and/or registered trademarks of THQ Inc.