Heroes of the Storm  is an upcoming game from Blizzard which you can actually sing up for the beta right now. The game looks to be a brawler type game with an intriguing cast of characters mixed with tech and fantasy battling  each other. Turtle Beach has just announced a Heroes of the Storm headset for PC which features swappable speaker plates with different characters on them, details below.. 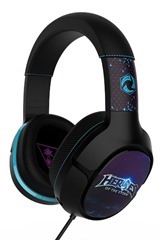 “Turtle Beach is honored to work with Blizzard on the Heroes of the Storm headset, and we’re excited to bring players a gorgeous new way to showcase their favorite heroes,” said Bob Picunko Chief Marketing Officer at Turtle Beach.

To learn more about Heroes of the Storm, head over to www.heroesofthestorm.com.