I’ve always wanted to get one of these for the Wii, I thought my kids would like it. Now though you’ve got your pick ofXbox 260, PS3 or Wii versions of the uDraw GameTablet that gives players a totally new and cool way to play games. 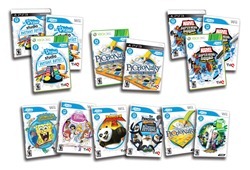 uDraw Studio™: Instant Artist™ comes packaged with the uDraw GameTablet. Instant Artist turns TVs into digital art studios and allows players to tap into their imaginations, complete art lessons, engage in creative activity-based gameplay, or simply draw freestyle with a wide variety of brushes, color palettes and art tools. The game also comes with the option to save and upload artwork directly to uDraw’s online community, where it can be easily shared on Facebook or printed out. uDraw Studio: Instant Artist is rated E for Everyone.

The growing library of uDraw titles will also include Pictionary™: Ultimate Edition, a new, high-tech version of the family game favorite. Available exclusively for uDraw on Xbox 360 (SRP US$39.99) and PS3 (SRP US$39.99), the game features new clues, vibrant HD environments, customizable gameplay and new functionality including intuitive touch screen gestures. For Wii, Pictionary™ (SRP US$29.99) has been one of uDraw’s most popular games. Both Pictionary™ and Pictionary™: Ultimate Edition are rated E for Everyone.

Recently released on uDraw for Wii (SRP US$29.99), Disney Princess: Enchanting Storybooks captures players’ imaginations as they are swept into the magical worlds of Ariel, Belle, Cinderella, Jasmine, Rapunzel and Tiana. As they help bring color to the princesses’ world, players will enjoy hours of creative activities including magic search, tilt a maze, spot the difference, make a melody, coloring book pages and tilt painting. Disney Princess: Enchanting Storybooks is rated E for Everyone.