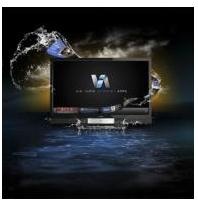 Vizio is in the news quite a bit today eh?

VIZIO enables web-based content to be easily accessible and viewed simultaneously with any input on the HDTV and is displayed in an easy to navigate, non-intrusive menu that can be adjusted to fit around the video on your TV screen.

VIZIO’s VIA(TM) Connected HDTV feature includes integrated wireless (802.11n dual-band) and wired networking for easy connection to the Internet right out of the box. VIZIO HDTVs enabled with this platform guide the user through a quick step-by-step set up process that runs as soon as the TV is turned on for the first time. Users simply select their wireless network from a list of all available networks (automatically discovered) to connect their VIZIO HDTV to the Internet. They also have the option to plug in an Ethernet cable directly to the VIZIO HDTV to access the Internet.

VIA(TM) Connected HDTVs also come with a customized universal remote control with built-in QWERTY keyboard that slides open to allow users to easily type keywords for their favorite movies, TV shows, music, chat, or simply enter logins and passwords for their favorite services. Equipped with Bluetooth, the customized remote also provides users with the added convenience of being able to type without having to point the remote at the TV. In addition, the customized universal remote has been designed with traditional infrared capabilities to allow consumers to control all of their existing CE devices connected to the television, such as DVD and Blu-ray players, VCRs, audio devices, cable and satellite set-top boxes, DVRs, and other AV equipment.

“We are excited by the support of the additional content and service providers being announced today. The overwhelming response so far from the biggest brands in this space validates our unique approach in addressing the growing consumer demand for online content and services on the biggest screen in the home,” said Matthew McRae, Vice President of Products at VIZIO. “Understanding that consumers still expect the TV to remain first and foremost the entertainment centerpiece of the home, we’ve gone to great lengths to ensure that the VIA platform integrates seamlessly with the existing TV experience and makes web-based content as easily discoverable as flipping the channel.”

VIZIO’s VIA(TM) Connected HDTV feature incorporates multiple technologies and software services to enable a unique experience that hides all of the complexity from viewers. One such technology is the Yahoo! Widget Engine, which provides an open platform that allows a new class of Internet services, called TV Widgets, to thrive in the TV environment. VIZIO’s platform also includes support for the Adobe(R) Flash(R) Platform for the Digital Home, an optimized implementation of Flash technology that enables developers and content providers to deliver HD video, rich applications and other Web content to Internet-connected televisions, set-top boxes, Blu-ray players and other devices in the digital home.

Now VIZIO is pleased to reveal additional leading content and service providers also working to bring their compelling entertainment, social networking, information and interactive services to the platform this year, including:

Revision 3 (www.Revision3.com) – The home of Internet Television, Revision3 creates content for passionate communities who want to watch shows that entertain, educate and help to expand their life experiences.

Vudu (www.vudu.com) – VUDU is a leading digital entertainment service that delivers tens of thousands of movies and more, including:

“Due to its rising brand recognition among consumers, VIZIO again took the lead in U.S. FLAT PANEL-TV shipments in the first quarter of 2009,” said Riddhi Patel, principal analyst, television, for the market research firm iSuppli Corp., El Segundo, Calif. “iSuppli expects the U.S. Flat panel TV market to reach 32 million units of which LCD TVs will account for 28 million units in 2009. Shipments of LCD-TVs with full-HD resolution – i.e. 1080p – will account for nearly half the market during the year. Sets that provide superior image quality and lower energy consumption by employing 120Hz refresh rates and LED backlighting and connectivity with Internet are expected to be in strong demand as consumers become more discerning in their LCD-TV choices.”