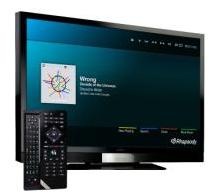 Vizio is in the news quite a bit today!

NEW YORK and IRVINE, Calif., June 23 /PRNewswire/ — VIZIO, America’s #1 HDTV and Fastest Growing Consumer Electronics Company, will be demonstrating their VIZIO Internet Apps (VIA(TM)) Connected HDTVs featuring the Rhapsody digital music service in press events this week in New York City. Through VIZIO’s VIA(TM) Connected HDTVs, Rhapsody subscribers will be able to access and enjoy any of 7.8 million songs right from their easy chair. These connected HDTVs will be the first to offer Rhapsody’s digital music service and are scheduled to hit stores nationwide this fall. 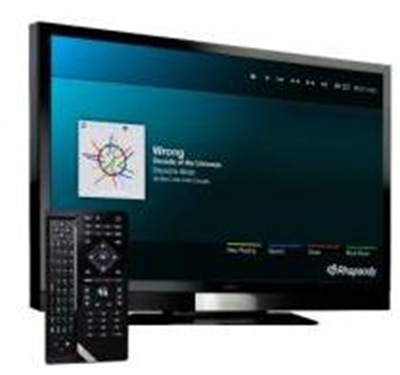 “Today VIZIO is pleased to be unveiling the first connected HDTV implementation of Rhapsody’s award-winning digital music service streaming right to VIZIO VIA(TM) enabled HDTVs,” says Matthew McRae, VIZIO VP of Products. “Rhapsody is just one of many innovative web-based applications that will roll out on our VIA(TM) Connected HDTV platform this year, and we’re pleased to be working with Rhapsody to deliver a tightly integrated and rich experience that consumers won’t find on any other HDTV currently in the market.”

Rhapsody Music on Your VIZIO HDTV

Rhapsody subscribers will now be able to browse Rhapsody’s massive catalog of more than seven million songs, all while simultaneously watching TV on their VIZIO VIA(TM) Connected HDTV. Users will be able to listen on demand to new releases, top albums, artists and songs, celebrity playlists, artist channels and much more from the easy-to-navigate menus custom-designed for the television. Using the VIZO VIA(TM) remote with built-in slider QWERTY keyboard, searching for any song title, artist or album also becomes truly effortless.

Once the user makes a selection, the track streams on demand direct to the VIA(TM) Connected HDTV using wireless (802.11n dual-band) or wired networking that is built into the TV. No dongles or accessories required, consumers can just connect the VIZIO VIA enabled HDTV to their high-speed Internet connection, and with one click, see all of their favorite online services like Rhapsody right on the big screen.

“The availability of Rhapsody on VIZIO HDTVs is a critical advancement toward the fulfillment of our vision of giving subscribers the ability to access Rhapsody everywhere they want to enjoy music for a flat monthly fee,” says Drew Denbo, General Manager of Business Development at Rhapsody America. “VIZIO’s #1 market position and their commitment to building quality electronics at market leading prices makes them an ideal partner to launch the first Rhapsody integrated TV.”

VIZIO Internet Apps (VIA(TM)) — Connecting to the Future of Television

Delivering unprecedented choice and control of web-based content directly to the television with just one button push and without the need of a PC or set-top box, VIZIO’s VIA(TM) Connected HDTV feature offers viewers the most convenient access to the widest range of top Internet content and services – all while simultaneously watching traditional TV broadcast or recorded video, for truly the ultimate experience in couch surfing

Getting a First Look and Listen

VIZIO’s VIA(TM) Connected HDTVs with Rhapsody’s digital music service will be demonstrated in New York during private press meetings 6/23-24, at the Text100 press event 6/23 and during PEPCOM’s Digital Experience press event 6/24. To request appointments or for more information about these events, please call or email the agency contacts below.

VIZIO, Inc., “Where Vision Meets Value,” headquartered in Irvine, California, is America’s #1 HDTV and Fastest Growing Consumer Electronics Company. In 2007, VIZIO skyrocketed to the top by becoming the #1 selling brand of flat panel HDTVs in North America and became the first American brand in over a decade to lead major categories in U.S. TV sales. Since 2007 VIZIO HDTV shipments remain in the TOP ranks in the U.S. and are again #1 in Q1, 2009 with over 20% market share. VIZIO is committed to bringing feature-rich flat panel televisions to market at a value through practical innovation. VIZIO offers a broad range of award winning Plasma and LCD HDTVs including the new XVT series. VIZIO’s products are found at Costco Wholesale, Sam’s Club, Sears, Walmart, Target, BJ’s Wholesale, and other retailers nationwide along with authorized online partners. VIZIO has won numerous awards including a #1 ranking in the Inc. 500 for Top Companies in Computers and Electronics, Good Housekeeping’s Best Big-Screens, CNET’s Top 10 Holiday Gifts and PC World’s Best Buy among others. For more information, please call 888-VIZIOCE or visit on the web at www.VIZIO.com.