So who knows where this smart glass thing is going but Vuzix has just announced that you can pre-order their M100 smart glasses right now and they’re selling them exclusively on Amazon. Price is $999 and you can get either gray or white colors. 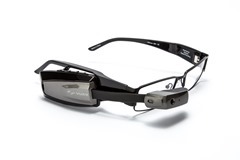 In anticipation for the holiday season, Vuzix® Corporation a leading supplier of Video Eyewear and Smart Glasses in the consumer, commercial and entertainment markets, today announced that a special prosumer version of its award-winning M100 Smart Glasses will initially be exclusively available on Amazon.com.

“This marks a major milestone for us and increases our ability to sell our products directly to consumers,” stated Paul Travers, President and CEO of Vuzix. “We are thrilled with the opportunity to offer our  M100s—exclusively on Amazon—as the technology is really gaining traction and people are seeing the benefits of what our hands-free smart glasses have to offer.” Vuzix’ M100 Smart Glasses are available for purchase through Amazon’s Wearable Technology store.

The M100 Smart Glasses include custom eyeglass frames made for the M100 by Rochester Optical, an accessory battery and a premium leather carrying case. The eyeglasses can be upgraded to match the user’s prescription at one of the more than 13,000 optical partner stores of Rochester Optical.

The M100 Smart Glasses is a cutting-edge hands-free wearable computing device that pairs with a user’s smartphone or available WiFi connection, offering text, video, email, mapping, and augmented reality through its personal display and computing system. The Vuzix M100 contains a virtual display with integrated camera for videos and snapshots. Running an Android OS the voice and hand gesture controlled M100 is designed to run applications in standalone operation or when connected to the internet, and works with thousands of existing applications with many more native applications in development.