I don’t know, I’m not sure about this product. On one hand I and I think everyone else like headphones that are good at noise cancellation or blocking the outside sounds but on the other hand the Fuser let’s you listen to your music and still hear what’s going on. I guess there are situations where you would want or need to be able to hear what’s going on right? The Fuser costs about $30 and it works with anything with a standard 3.5mm audio jack and it connects in-line between your headphones and device and let’s you hear your music and still hear what’s going on. The Fuser has a microphone built-in that let’s you hear and a  built-in battery that offers over 10 hours per charge. I don’t know I guess I just never thought of something like this before, PR below for you, what do you think? 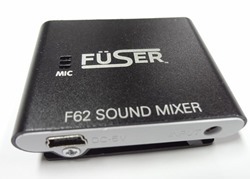 With current technology on the market today,listening to headphones forced users into an all or nothing situation….hear the music or audio on the headphones and not hear anyone or anything else OR continually pull the earphones out to hear voices or outside sounds. There was no way to hear both the music in stereo and outside sounds with any clarity or quality…until now.

The Fuser from Olens Technology is a new electronic device that allows people to hear the ideal blend of headphone music AND the world around them at the same time. The Fuser provides an optimum balance of sound between an audio device and the essential and desirable sounds around us. It allows users in places like office settings and cubicles, or people walking or sitting outside, to listen to their world while hearing everyone else’s world at the same time.

Unlike many of the noise-canceling headphone technologies on the market now, the Fuser doesn’t just seal out peripheral sounds, it seamlessly merges music from audio devices with all those external sounds giving users the ideal amount of each. It allows the user to listen to a chosen volume of music while still being able to hear and talk with friends nearby. The Fuser is ideal for the millions of cubicle workers who listen to music while working but still need to hear the phone, the voices of co-workers and more. The Fuser ensures that everyone else around the user isn’t inconvenienced by his or her music, whether it is family members, friends, co-workers, fellow travelers on the bus or at the airport, etc.

Combating the increase in injuries, accidents and even deaths caused by headphone audio distraction, the Fuser provides a new level of safety for people who like to walk, jog or ride a bike while listening to music via headphones. It allows traffic, voices or alerts nearby to be heard while still providing full rich stereo audio that isn’t overly muted or badly muffled. The Fuser supports all iPods, iPhones, iPads, Android phones, MP3 players, laptops and desktop computers. The Fuser can even work just with headphones (without a music device) as a powerful hearing aid for anyone who is looking for an alternative to wearing unattractive hearing aids.

The Fuser’s patent pending technology increases awareness of natural sound in an area by using its own built in microphone and amplifier to masterfully mix the music in the headphone with the surrounding sounds. Simply plug any device into the input jack of the Fuser and any headphone into the output jack. The Fuser’s microphone volume is then adjusted to filter in or out as much or as little external ambient sound as desired, without distortion or muffling.

Check out the video here highlighting the product: www.thefuser.com

The Fuser sells for $29.95 and is available at: www.thefuser.com