The LG Quantum features a 3.5” capacitive touch screen and a slide out qwerty keyboard, and of course it’s the Windows Mobile platform.  The camera is 5mp with auto-focus and flash with the ability to do 720P hd video. It’s got a 1ghz CPU in it along with 16gb of memory and it even comes with 10 free apps through the LG apps store. Price will be $199.99 with two year agreement and data plan.

LG Mobile Phones today announced LG Quantum, the first Windows Phone 7 handset from LG, is now available online at www.wireless.att.com and in AT&T* company-owned retail stores nationwide.  Available exclusively to AT&T customers, LG Quantum keeps users connected to the contacts and networks that mean the most with dynamic Live Tiles and Hubs that automatically update with the latest news. LG Quantum allows users to do more in fewer steps with a 3.5 inch capacitive touch screen and a full slide-out horizontal QWERTY keyboard. 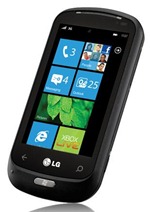 "LG Quantum gives users the freedom to organize their lives while on-the-go by delivering a distinctive blend of innovative tools and efficient design," said Tim O’Brien, vice president of trade and consumer marketing for LG Mobile Phones. "Providing faster communication, integrated messaging and breakthrough multimedia experiences, LG Quantum is a smartphone device unlike any other."