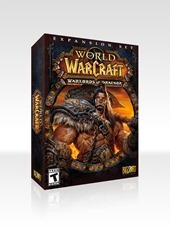 Missed this  one yesterday I guess, but better late than never right? I don’t know anything about WOW, never  played it, I’m not into mmorpg games but this new expansion will let you boost one character of your choosing instantly to level 90 which from what I understand is a big deal…

It’s time to take the fight to the Iron Horde on their home turf. Warlords of Draenor™, the fifth expansion to Blizzard Entertainment’s acclaimed massively multiplayer online role-playing game, World of Warcraft®, is now live!

Warlords of Draenor sends Azeroth’s heroes beyond the Dark Portal on a desperate mission to save their world from the vicious Iron Horde—a formidable army of the most infamous orc clans from Warcraft’s battle-scarred history. As players explore the savage alien world of Draenor, they’ll encounter fierce new foes, befriend unlikely new allies, oversee the construction of a mighty base to withstand the orc onslaught, and forge their own legend from the raw materials of the past.

“With the 20th anniversary of Warcraft and the 10th anniversary of World of Warcraft taking place this month, now is the perfect time to re-explore the series’ roots—and to reinvent one of its greatest conflicts for a whole new generation of players,” said Mike Morhaime, CEO and cofounder of Blizzard Entertainment. “Warlords of Draenor contains some of the most epic and thrilling content we’ve ever created, and the included level 90 character boost makes it easier than ever for anyone to jump right into the action.”

Warlords of Draenor adds new features and a world’s worth of exciting new content for World of Warcraft players:

Explore a Savage World: Explore the hostile world of Draenor, home of the orc and draenei races, as it once existed, and adventure in all-new zones alongside characters central to Warcraft history.

Build Your Garrison: Establish and expand your own customizable stronghold on Draenor, and gather NPC followers to collect resources and embark on missions under your command.

Jump to Level 90: Boost one character of your choosing to be instantly ready to explore the wilds of Draenor, making it easier than ever to enjoy the latest content with your friends.*

Adventure to Level 100: Reach new heights of power and unlock bonuses to further enhance your abilities on your way to the new level cap of 100.

…And More: Take on an array of Dungeons, Raids, and Challenge Modes; seek out otherworldly pets and mounts to add to your collection; engage in exciting world PvP in Ashran—no matter what kind of content you enjoy, new challenges and rewards await.

Warlords of Draenor is available now in a digital and physical Standard Edition (SRP: $49.99 USD) as well as a Digital Deluxe Edition (SRP $69.99), which contains the following in-game bonuses for World of Warcraft and other Blizzard games:

World of Warcraft—Dread Raven Mount and Dread Hatchling Pet: Swoop down from the dark of night on the black-winged Dread Raven, a mortal progeny of Anzu, and devour your prey in your next Pet Battle with the adorably ferocious Dread Hatchling.

StarCraft® II—Warchief Portraits: Summon the strength of two of the most fearsome Iron Horde warchiefs—Grommash Hellscream and Blackhand—as you clash in the Koprulu sector in StarCraft II.

Diablo® III—Warsong Pennant: Brandish this battle-torn pennant on your back, and channel the rage of the Warsong Clan against the demonic forces of Sanctuary in Diablo III.

Hearthstone®: Heroes of Warcraft™—Blackrock Card Back: Outfit your champion’s deck with a custom card back forged in the fires of Blackrock.

Warlords of Draenor is also available in a retail-exclusive Collector’s Edition (SRP: $89.99), which comes equipped with the digital bonus items from the Digital Deluxe Edition as well as a full-color hardcover art book, a behind-the-scenes two-disc Blu-ray/DVD set, a CD soundtrack, and a Warlords of Draenor mouse pad. Players should check their local retailer for details and availability.

All versions of the expansion come with one Level 90 Character Boost, making it easier than ever for new and returning players to experience Warlords of Draenor’s content alongside their friends and family. For more information, visit www.warlords.com.

Warlords of Draenor is available now in the U.S., Canada, Europe, Russia, Southeast Asia, Australia, New Zealand, Mexico, Argentina, Chile, and Brazil, and will be available November 18 in South Korea, mainland China, and the regions of Taiwan, Hong Kong, and Macau.

*Players upgrading to Warlords of Draenor from World of Warcraft Starter Edition must wait until trial restrictions are removed before character boost becomes available (may take up to 72 hours).