The latest X-Men game is now available in stores. The new X-Men Destiny is an RPG and action style game where the choices you make affect the outcome of the game and how your character will react or which side you’ll be on. You get to play as a new mutant who’s just discovered their powers and how to use them, while playing your actions will affect the game and determine who will be the victor, good or bad. It’s available for Wii, PS3, Xbox360 and even the Nintendo DS. 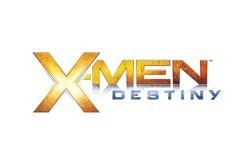 The battle between the X-Men and Brotherhood of Mutants rages on – and your choices will shape the fate of the world!  Available today at retail stores nationwide, Marvel Entertainment, LLC and Activision Publishing, Inc.’s X-Men™ Destiny places gamers into the role of a young mutant just discovering their newfound powers; where the choices they make and alliances they forge determine which side of the mutant cause will reign supreme. X-Men Destiny gives players three all-new mutants from which to pick, and an original story penned by acclaimed Marvel writer Mike Carey, delivering an action/RPG experience where players have ultimate customization of their mutant’s powers, development and "destiny."

"For the first time ever, gamers can play as a NEW Marvel mutant and make the key decisions that lead to their siding with either the X-Men or Brotherhood," said David Oxford, Executive Vice President and General Manager, Activision Publishing, Inc.  "The opportunity to play out X-Men Destiny ‘s branching story arcs as three all-new characters provides a unique way of experiencing the X-Men Universe – one that we think fans are going to love."

"A great story delivered by Mike Carey, coupled with a game landscape that allows players to make key decisions that shape their journey, is a combination we’re really excited about and think fans of the Marvel Universe will be as well," said TQ Jefferson, Vice President of Games Production,  Marvel Entertainment.

Fighting alongside and against some of Marvel’s greatest X-Men characters, including Magneto, Cyclops, Wolverine and Gambit, gamers will evolve their mutant skills through X-Men Destiny ‘s upgrade system, allowing them to mix and match X-Genes and abilities from various X-Men and Brotherhood characters such as  Iceman’s freeze powers and Emma Frost’s diamond skin.

X-Men Destiny was developed by Silicon Knights for Xbox 360® video game and entertainment system from Microsoft, PlayStation®3 computer entertainment system and Wii™, and have been rated "T" (Teen – Mild Language, Mild Suggestive Themes and Violence) by the ESRB.  Development studio Other Ocean created the Nintendo DS™ version of the game, which is rated "E10+" (Everyone 10+ – Fantasy Violence and Mild Suggestive Themes) by the ESRB.

For more X-Men Destiny information, check out the HeroHQ community at www.facebook.com/herohq.