Let’s take a break from the CES new, but I do have more of it though coming, Z-Nation season one is coming to DVD on February 10th 2015. The release will be a three disc set with 13 episodes and quite a bit of extras included as well.  I checked on Amazon and it’s listed for $30.19 for the DVD set or you can get the digital versions, HD and SD, there as well.. 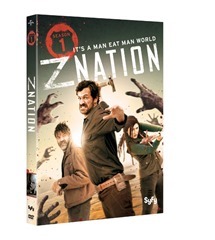 The survivors of a deadly epidemic band together to save mankind’s last best hope in the hit Syfy series, Z Nation: Season One, coming to DVD on February 10, 2015, from Universal Pictures Home Entertainment. A gritty, tongue-in-cheek take on the post-apocalyptic zombie thriller genre, Z Nation: Season One is an epic adventure that is being described as “Mad Max meets The Walking Dead” (Ann Oldenburg, USA Today). The three-disc set contains all 13 blood-curdling Season One episodes produced by The Asylum, creators of the wildly successful Sharknado movie franchise, and bonus features including a gag reel and featurettes that reveals what it takes to bring the undead world of Z Nation to life.

Three years after the devastating ZN1 virus gutted the country, a team of everyday heroes must transport the only known survivor of a zombie attack—and humanity’s last hope of developing a vaccine—from New York to California. However, their charge is hiding a secret that could endanger the mission. Z Nation: Season One is a rollercoaster of non-stop thrills, chills and blood-splattering fun. Watch every episode back-to-back and uninterrupted, and join this rag-tag team on an epic road trip across post-apocalyptic America.

Race for the Cure: The Making of Z Nation Season 1

Making of a Znado and More: Behind the Visual Effects

Creating the Gore: A Look into the World of Synapse FX

Music of the Apocalypse: Making of the Z Nation Score