Dead Space is and excellent game, but it started you out sort of in the middle of the story and you’re left wondering how’d you get here. Yes you can watch the additional movie and read the comics to learn more, but a game of the vents would be better, and now we’ve got one that is a Nintendo Wii specific title. When I first heard that Dead Space was coming to the Wii I was a bit apprehensive really as the Wii isn’t known for its graphics capabilities, and I just wasn’t sure how it was going to turn out. Rest assured though, Dead Space Extraction is a game that you won’t want to miss, Visceral and EA have done an excellent job bringing this popular title to the Wii.

Dead Space Extraction is an on rails style shooter that let’s players live through the events that led up to the original Dead Space game. The graphics are just amazing for the Wii, and overall the game is worthy of having the Dead Space name attached to it. I’m sure many fans of the original Dead Space were not sure how this game was going to work out on the Wii, but read on to see sreeenshots and movies and to learn why this is a must have title for any Dead Space fan…

Obligatory box shots to start with: 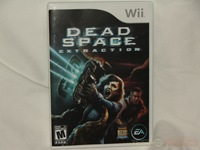 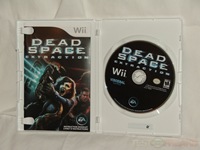 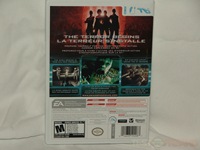 We’ll start off with the intro movie:

Once the intro is done you’ll be taken to the main menu with a few choices and to create or select your profile. 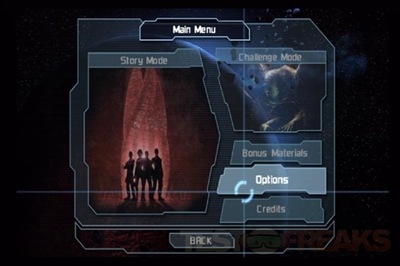 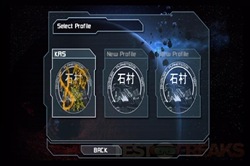 In the options section you can adjust Gameplay settings, Audio and Video settings and Player Controls including calibrating your Wii Zapper or gun. 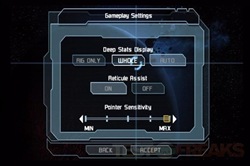 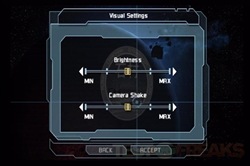 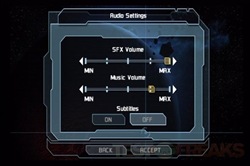 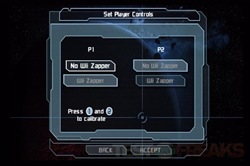 The Challenge Mode is just that a challenge where you can go back to areas you’ve visited and fight waves of monsters to survive. 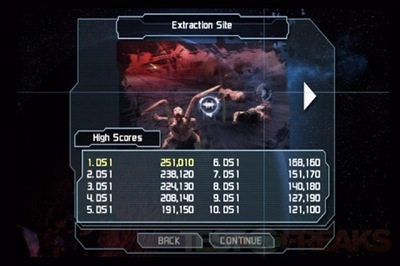 The Bonus Materials section is where you’ll find more about the Dead Space story in the form of a semi-animated comic book videos. As you progress through the game you’ll unlock issues and get to see the entire story unfold. 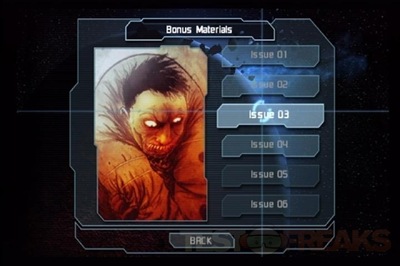 There are four difficulty levels, Normal, Hard, Expert and Impossible, but only the first two are unlocked when you being the game. 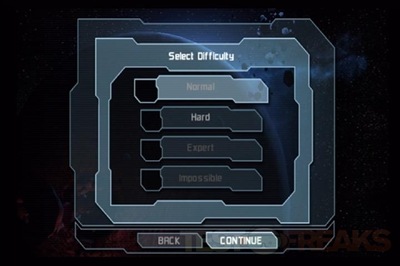 As with the original Dead Space you’ve got several weapons to choose from, but there’s nothing new. Controls for them are of course a bit different in that they utilize the Wiimote capabilities. To access alt-fire for the weapons you turn the remote sideways, and for the saw you push the Wiimote forward to make the blade go forward. You have four weapon slots in the game and when you find something new you’ll be given the option to keep it and swap it out with another weapon or just leave it where you found it. Well let me correct that, you really only have three weapons slots that you can use as you’ll always have the rivet gun with unlimited ammo filling one slot. 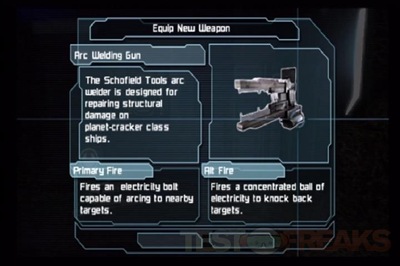 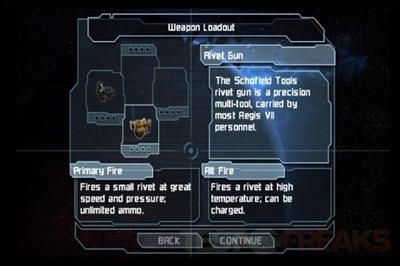 To play the game you use both the Wiimote and the Nunchuk. The Nunchuk is used for several things.  You’ll be selecting weapons with the stick, reloading by shaking it, Stasis is activated with the ‘C’ button and your telepathic powers or Kinesis with the ‘Z’ button. Dead Space Extraction uses a times reload system similar to the that of Darkest of Days that I reviewed recently, when you start a reload a bar fills up with a small section that you need to stop in by hitting the trigger, if you hit that spot the weapon reload instantly, if you miss it takes longer. 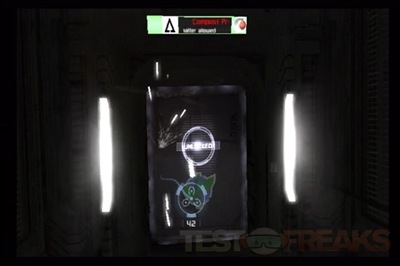 When I played Dead Space Extraction I didn’t use a Wii Zapper I used a pistol attachment which worked wonderfully well to play with. For the most part the only button you use on the Wii Mote is the trigger or ‘B’, but you’ll also use the Wiimote to activate your Glow Worm in certain sections for lighting, you just shake the Wiimote to charge the Glow Worm.

Dead Space Extraction tells the story of four space colonists stranded on the Aegis VII mining colony in the furthest regions of deep space. The game introduces Lexine, an important new heroine to the Dead Space universe. As the crew fall victim to a mysterious contagion aboard the ship, it quickly becomes clear that protecting Lexine is their only hope for survival. The game features the highly polished, cinematic action experience that the Visceral Games team is known for.

Telling the story of four space colonists trying to escape a mysterious infection, Dead Space Extraction explores the origins of the necromorph invasion that threatens humanity and the universe. At the center of this group is Lexine, an important new heroine being introduced for the first time to the Dead Space storyline. As the crew continues to fight for their lives, it becomes clear that protecting her is their only hope for survival. Luckily, players are armed with an arsenal of weaponry, an easy-to-use control system built from the ground up for the Wii, and can even recruit a friend to play co-operatively, a first for the Dead Space franchise.

Developed at Visceral Games, Dead Space Extraction is rated M for Mature by the ESRB with descriptors of Blood and Gore, Intense Violence and Strong Language and 18+ for PEGI. Dead Space Extraction will be available for MSRP $49.99 on the Wii. For more information about the game, go to the website at http://www.deadspacegame.com or http://info.ea.com.

Dead Space Extraction put you in the shoes of one of four people as you play, you follow their story and see how things unfold. You actually start the game back at the beginning of the events in Dead Space when the marker was first found. You are on the crew that helped unearth it, you get to see the effects of the marker first hand and how things started.

Gameplay is very much different than the original Dead Space it’s first person whereas the original was basically 3rd person. The other major difference is that you cannot roam around freely, it’s a rails style game where you follow a pre-scripted path. There are a few points in the game that you’ll select which way you want to go, but other than that you’re following the set path. There are many points in the game though where you’ll get a few seconds to look around a room or area, the cursor will change to one with arrows on it and a timer. 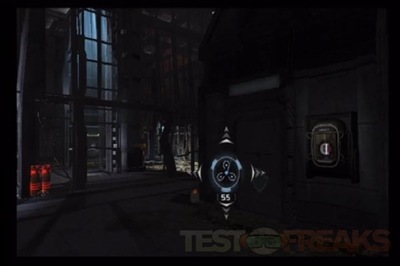 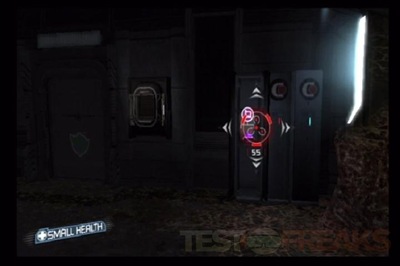 In this mode you’ll get to look around and collect things with your telepathic abilities. You can open up boxes and lockers and collect what’s in them like ammo, health or audio/text tapes that tell you a bit more of the story. 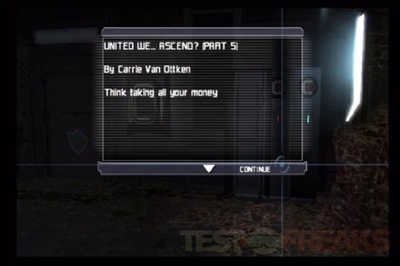 You’ll also find these things just lying around as you play, but you’ll have to be quick at grabbing them since you really don’t have control over looking around. As you play there are also boxes that can be broken open to find things as well. As I played I found that there’s usually enough ammo floating around to survive, but I did run out a few times. The idea is to pay attention and act fast when you see something lying around, make sure you grab it because most likely you won’t turn to see it again.

The Kinesis ability is not only for collecting things but can be used to grab and throw objects as well. This can be a great way to conserve ammo if your low on it and sometimes you’ll find explosive canisters that you can toss at enemies, or you can grab and enemies projectile and throw it back at them. 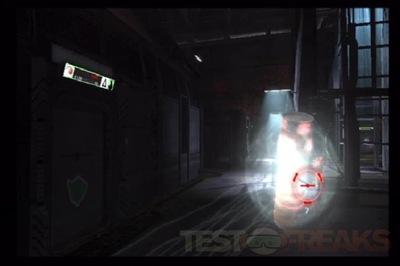 During the game there are also areas where you’ll be traveling in zero gravity, essentially you jump from one point to another and fight in zero gravity.

There’s not much of a puzzle aspect to the game, there are places where you’ll trace a circuit with the Wiimote to accomplish a task like hacking a terminal, activating or deactivating something. Doing it with the Wiimote is fairly easy, not too much skill required really.

I’m truly impressed by the graphics in Dead Space Extraction, Visceral has done an excellent job with them, they really push the Wii to it’s limits of what it can do. It’s the best looking game really that I’ve seen for the Wii honestly. 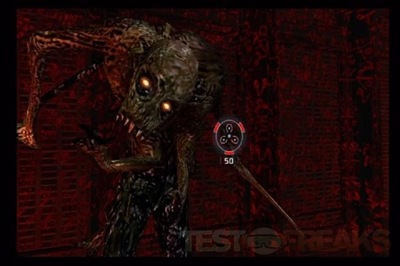 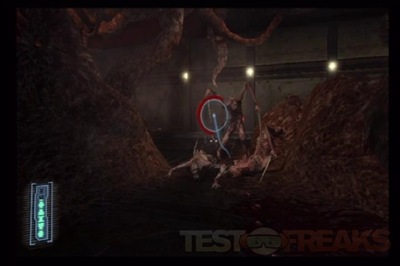 Take something like fire for example, it took how long for PC games to have realistic looking fire, the Wii has it first try… 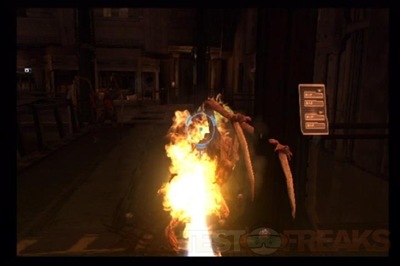 The screen captures I’ve got really don’t do the graphics justice, I’ve got an HD recorder that records videos through the component connection, then I grab screens from the videos, so they’re not exactly perfect quality.. but it works for the most part.

As far as being a horror game, it really isn’t, yes it’s dark, very dark, there’s monsters and gore but there aren’t really any jump out of your seat moments like the original Dead Space had. You’re really not going to be scared playing this title, but that’s not a bad thing, the game stands well as it is. It brings us the story of the happenings before the original game, and instead of watching the movie or reading about it you get to experience it and it works well.

The controls of the game work well together, they’ve utilized the motion functions and all most of the buttons. It’s a rails style game, but it offers much more than just moving around shooting things.

I’ve got a final movie for you to end this with, a little over three minutes, basic gameplay stuff, killing monsters etc. You’ll see me get a gun, use the Glow Worm, and torch some monsters, reloading and picking up stuff.

It’s also worthwhile to own as it brings some more adult elements to the Wii library of titles.

When I first started playing Extraction I was a bit let down by the whole being on rails thing, but after a while you get accustomed to it and it works for this game. If you’re a fan of Dead Space then this is a must have for your collection, if you like light gun games as I do then you’ll like Extraction, and if you want to see what the Wii is capable of then you’ll want to grab this title as it really pushes the Wii to the limits of what it can do.

Cons:
-Can be a bit frustrating at times