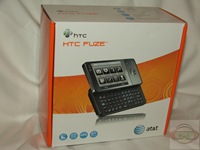 Yes, another cell phone review for you, this time we’ve got the sequel or replacement to one of the best phones for AT&T, the Tilt, well at least that’s my opinion anyway. I’ve got the Tilt and I love it, so I was very curious as to how AT&T was going to top it, or replace it.

Today I’ve got the HTC Fuze for review, it’s the new Windows Mobile based phone from AT&T, this phone goes by a few names and there are quite a few variations of it floating around the cellular networks right now. I’m sure by this point most of you know this phone, it’s been hyped for quite a while, but is it worth the hype? Is it really all that?


First up we’ve got the unboxing video for you to see:

World-class PDA design
A powerful Windows Mobile 6.1 smartphone with both a touch screen and a full QWERTY keypad.

So now check out this video for usage and a lot of my impressions as well, a video review of sorts

I mentioned it a couple times in the video that I did have problems with call quality, I’m not sure where the problem lies as I’ve never had the problems with other phones. Calls were at times full of static and the volume would fluctuate, this was using Bluetooth and not using it. It also did not matter if I was talking to someone on a land line or another cell phone the problem was there on either or, but not all of the time, it was spotty.

As for the interface, coming off of the Tilt it was a bit hard to get accustomed to, it’s essentially a whole new interface where you use your fingers more than the stylus. Speaking of the stylus, I didn’t care for it, it’s very lightweight and almost felt like it could easily break, I like the stylus to have a bit of heft to it. Back to the interface though, once you’ve used it for a few days you’ll come to understand how it works, and actually it does makes things a bit easier with navigation, but that also depends if it does what you want it to do, at times it just didn’t do what it was supposed to. There were times I could click something and it would be a couple seconds before anything happened, and I also found myself hitting other keys, especially when dialing numbers when I used my fingers for it. Yes my Tilt does the pause at times as well, but I expected a bit more from this phone considering it has a more powerful CPU and more memory on board.

Using the d-pad and the buttons near it is a pain, the d-pad just doesn’t seem very response, I found myself clicking many times for it to do something, and it’s very easy to hit on the side buttons when you’re using the pad.

The keyboard is not bad to use, but I can’t figure out why ATT changed the layout to not have the numbers across the top as the original HTC Touch Pro is, leave it to ATT though to mess with a good thing. Supposedly the layout is more for people who text a lot, but the Fuze is intended for serious mobile users, it’s made to be a mobile office of sorts and not a text happy teenagers phone, it’s supposed to be a professional phone.

Bluetooth usage was fine, I used my Jabra BT530 with it and had no problems at all, after the initial paring it paired every time with no problems after.

GPS seems to work fine, though there is no real GPS program in the phone like TomTom, there’s only ATT Navigator. The GPS seemed to get a lock quickly with several satellites and pinpointed my location very closely. Oh and it’s A-GPS not GPS.

The screen is nice and colorful, that’s one thing I do like about it, it’s 640×480 as opposed to the Tilts 320×240 screen. The screen is very bright and it’s still visible outdoors in bright light as well.

The outer casing the Fuze is nice for looks, yes it looks great but it’s a fingerprint magnet, the front and back are, and the glossy black finish really makes them stand out.

As for battery life, just using the phone as a phone, and with Bluetooth on the life is good, but as soon as you start listening to music, browsing the web etc, expect the battery life to drop very quickly, and the main reason is the small battery that is in the phone.

Web browsing is fine as well, the Fuze uses Opera Mobile which is nice especially when compared to Internet Explorer.

I used the phone for a week total going about my normal business and really I’m not impressed with it, it’s supposedly the replacement for the Tilt, but I’ll happily keep my Tilt if this is the upgrade. The Fuze is one of those products where the hype and anticipation exceeds the actual product and it’s performance.

Here’s a demo of the video camera in action:

as you can see video is very weird when inside, it changes colors often from dark to light, it’s very annoying and overall pretty bad.

and here’s a few still pictures taken with the Fuze at high resolution: 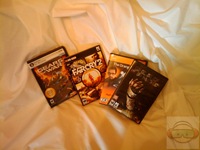 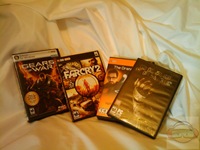 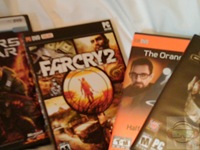 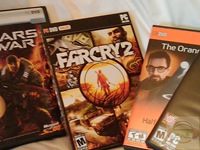 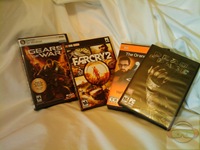 with these samples as you can see they seem dark, it was fairly bright in the room, with an overhead light and the window blinds open to allow light in as well. I also found you need to hold the phone very still to get good pictures and close ups are not that great, overall though the pictures are not that bad, except for being a bit dark.

Conclusion:
The HTC Fuze is not a bad phone overall, it will take most users quite a bit to get accustomed to the new interface and the lack of buttons, the Fuze is meant to be navigated with the fingers primarily, and for those of us that like buttons and navigation pads, we’re out of luck. The good part is of course the large, beautiful screen, more memory and a fast processor, all of this combined makes for a great phone.

Once you get accustomed to the interface it’s easy to use and it seems to work well for the most part, at times though it seems to not do what you want it to.