One complaint most people about the iPhone and iPods is the quality of the included Apple headphones. Relatively speaking they sound fine but once compared to a higher quality ear bud you quickly realize the difference in sound quality. Good sounding headphones usually cost more than most people care to spend. As more headphones hit the market; finding a low cost quality head set has become less difficult.

iFrogz is known for their mp3 accessories and have numerous models of headphones. Today we will look at one of their EarPolution models – the Timbre. This noise isolating in ear headphone with a built in microphone is designed for use with the iPhones and Blackberries. It is an affordable replacement for the sonically challenged Apple earbuds.

The EarPollution Timbre comes packaged in a silver and black cardboard package. The ear buds are visualized through a clear plastic window in the center of the box. Inside the package is the Timbre with two additional sets of ear fit pieces. 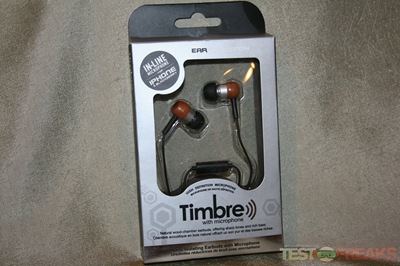 Closer inspection of the EarPollution Timbre shows a standard appearing set of ear buds with one small exception. The isolating end of each ear piece is composed of a wood chamber. The wood provides a different look from other headphones and its composition helps provide strong, clean bass and pleasing timbre; thus the name. 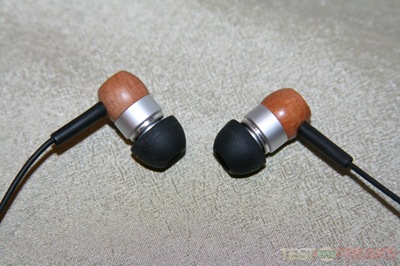 iFrogz provides plenty of cord length with 1.1 m in length. The input jack is designed to fit all versions of the iPhone including the first generation version with the tapered headphone input. On the right ear cable is a small rubbery black control button for answering and ending phone calls.

There are three sets of ear bud pieces in small, medium and large sizes to fit most every ear canal. These buds are composed of soft black silicon. 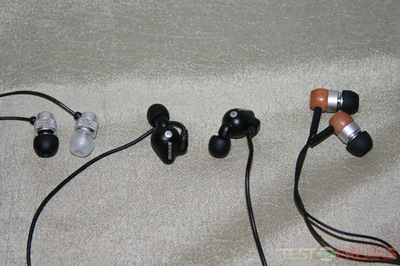 The Shure requires some manipulation for proper ear placement while the V-Moda and the Timbre are easily inserted into the ear canal. All three fit well although the Shure tended to get mildly uncomfortable over prolonged use while the other two were relatively unobtrusive.

I listened to several different musical styles to get a sense for each of the headphones. Musical selections included some Bach, Beatles, Dream Theater, Neil Young and Norah Jones.

Immediately the Timbre’s rich deep soundstage stood out from the V-Moda. I was able to hear more bass yet the treble and mid range were not overpowered by the deep bass. The V-Moda sounded tinny in comparison. Surprisingly the more expensive Shure sounded muddy when pitted against the Timbre. Overall I was really impressed by the audio quality emanating from these “cans”.

The microphone of the Timbre also scored well as the people on the other end of my iPhone conversations told me that the sound was crystal clear. Using the side button allows calls to be answered and picked up without going to the iPhone directly.

A word of warning with the Timbre, the sound isolation on these ear buds is surprisingly good. With the Timbre in place, the outside world was nearly inaudible.

The EarPollution Timbre is a great sounding set of “cans”, especially for the price. They provide a rich deep soundstage without overpowering the music with too much bass. They can be found for around fifty dollars retail making these an affordable replacement set for the meager headphones that ship with the iPhone.

As a headset for phone conversations the Timbre works well and calls can be answered and ended from the switch on the right side ear cable. The wood chambers provide a unique look while helping deliver a warmer richer sound experience. There are more expensive headphones on the market that would be hard pressed to sound as good as the EarPollution Timbre.