Historically video games based on movies come up short when compared to the source material. Generally a publisher will try to cash in on the popularity of a film by quickly releasing a subpar game at the same time as the film is playing in theatres. These games are easy to spot as they have shoddy graphics, horrible voice acting, poor game design and/or frustrating game controls. Especially notorious for these poor interpretations are the kid movie inspired titles.

Every once in a while, there is a license based title that exceeds expectations. Unfortunately, Kung Fu Panda: Legendary Warriors falls somewhere between these two points. It is not a bad game, but there is nothing ground breaking in this Wii title. In fact, it seems to be a port of the PS2 version with the Wii control scheme. This is not a criticism of the title, but just a description of fact.

Gameplay revolves around the player controlling Po – the roly-poly hero who became the Dragon Warrior at the end of Kung Fu Panda. The majority of the single player game play involves controlling Po, but there are tasks where the player can control other characters such as members of the Furious Five. The plot involves saving the land from the villain Tai Lung and the gangs that work for him.

Game mode includes Story Mode, Master Story Mode and Legendary Story Mode. These modes equate to difficulty level. To get to the next higher level, the player needs to beat the prior mode with an ‘A’ ranking. Versus Mode allows the brawls between players or against the CPU.

Multiplayer features new levels and characters not found in the single player version. In addition, there are several different game modes which are unlocked by finding rare coins scattered in the story mode. Survival Brawling and Shooting Gallery are two such games.

Kung Fu Panda’s Po and the Furious Five return in an all-new awesome video game adventure in Kung Fu Panda: Legendary Warriors. Developed exclusively for Nintendo platforms, gamers can play as Po, Tigress, Monkey or Shifu on Wii as they battle hordes of enemies using their masterful kung fu skills to save the rest of the Furious Five who have been captured by the evil Tai Lung. Players can even invite a friend to join the action at any point in the pick-up and play co-op mode or challenge each other in the head-to-head or team-based multiplayer mode.

Po, Monkey, Tigress and Shifu return in an all-new action-packed journey to protect the Valley of Peace from Tai Lung and his minions. Utilizing motion and gesture-based controls gamers perform acrobatic jump attacks, wield weapons against foes and unleash powerful Chi Attacks by simulating customizable symbols featured on-screen. A second player can jump into the epic kung fu battle at any time to help chop, kick and punch their way to awesomeness in the co-op or multiplayer modes.

The game is available on Wii for a suggested retail price of $49.99 and is rated “E10+” (Cartoon Violence) by the ESRB.

As Po progresses through the game, he will gather up coins, which allow the player to buy clothes for Po, upgrade health and moves. During the course of gameplay, the player will be able to unlock other characters such as Master Shifu and the Furious Five.

On the main game screen, we can see five meters – Health, Chi, Revive, Rabbit and Combo. Keep track of these meters, they provide key information during your brawls.

Gameplay is a mix of fighting, shooting, collecting various items and platform hopping. In addition to fighting lackeys and henchmen, there are bosses to beat at the end of each level. Each of these bosses has specific weaknesses which must be attacked for them to be defeated.

Kung Fu Panda: Legendary Warriors uses a combination of button, control stick and Wiimote movements and needs both the Wiimote and Nunchuk connected. The A button performs single or multiple jumps, the B button is for blocking, the C button initiates a Chi Attack while the Z button performs a Rabbit Attack. These buttons used in combination or with the Wiimote create a multitude of moves for Po and other characters.

The list of moves is pretty long and getting them down takes several play sessions. However, you can easily get by using the fast attack to progress through the game. I did notice that the Wiimote is not the most accurate when trying to nail maneuvers which requires precise timing.

Special attacks such as the Chi Attack and Rabbit Attack require drawing a symbol using the Wiimote. Sometimes, this symbol is not accurately detected by the game and thus renders the attack powerless. This can be especially frustrating, during a boss battle.

The characters fighting abilities and skills can be upgraded at the end of a stage by collecting coins. Other characters become available in later stages, which is a nice change of pace from constantly playing as Po. 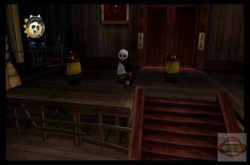 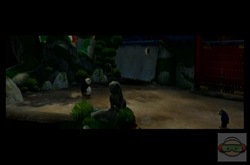 Graphically the game is on par with the PS2 version and does not make the player feel they are using a next gen console. Unfortunately this is the case for many Wii games, since the system is not much more powerful than the original Xbox or PS2.

Character animations are smooth and each character moves the way they did in the movie. Poo is bouncy, Tigress is sleek and quick and Master Shifu is a high flying Yoda like fighter. The environments are cartoon like and fit perfectly with the story. The cut scenes are drawing heavy animation, relying on still shots to help advance the plot. 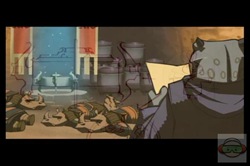 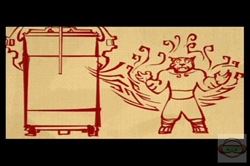 The camera like most platform games does have its problems. The camera follows the character and sometimes gets stuck behind an in game object. In addition, there is some frame clipping occurring from time to time.

The characters sound like their movie counterparts, which adds to the quality of the game. Po sounds like Jack Black, Tai Lung sounds like Ian McShane, etc.

Using the basic moves, I was able to get through Kung Fu Panda: Legendary Warriors without much difficulty on Story Mode. To get to the next level, you will need to master some more advanced attacks to earn an ‘A’ ranking to get to the next story mode.

Overall, Kung Fu Panda: Legendary Warriors is a fun game and certainly not a throw away product trying to capitalize on a popular movie. The game play was easy enough that my daughter was playing right along with me from the very beginning.

Kung Fu Panda: Legendary Warriors is a good game and does an acceptable job of representing the source material. There is plenty of replayability with the three difficulty levels, plenty of variety in the gameplay and the ability to unlock multiplayer maps and scenes from the movie by finding rare coins. Most licensed games are released to the public without any care for the quality or the title it represents, this title is not one of these games. Overall, Kung Fu Panda: Legendary Warriors: Legendary Warriors is a worthy addition to your Wii collection, especially if you enjoyed the movie.