I know very little about soccer. I live in Pittsburgh, Pennsylvania – a city where we care about soccer as little as a city possibly can. However, I do know about games. New Star Soccer 4 is an immense game about not only playing soccer, but managing the route to a successful life, career and portfolio. The title is a huge undertaking for such a small production team, and really shows the capabilities that independent developers have to create pretty great products. It does have a milieu of flaws, bugs and errors – but it redefines the way we normally look at soccer games, making the activity more involved and, dare I say, more interesting, than ever before.

The game starts you off as a pretty crummy soccer player and forces you to start small and dream big, working and training your way through the ranks to actually become a star.

Created by Si Read, New Star Soccer 4 is obviously the fourth installment in the NSS lineup. It is the first one to boast 3d graphics, and while they are still primitive, they add a lot to previous titles. The price is $24.99 US, which may be a tad steep for some, or right on target for serious soccer fans. It’s a bit higher than a lot of downloadable Internet games, but the wealth of things to do in this title helps justify the price. 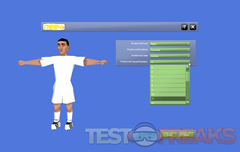 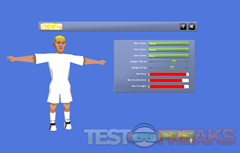 New Star Soccer 4 is an action-packed football career game where you can become the best player in the world. Whether you choose to start out at a premier team or in the lower leagues you will need to prove yourself on the pitch and off it. Build your skills in the training mini-games then grab the headlines on match day. You will also need to keep an eye on your relationships with friends, the media, your girlfriend and more. If your personal life suffers so will your performance, and the choices you make will ultimately determine your success.

I reviewed this game using the Mac installation. It was as easy to put on the computer as anything else, just mount and throw into Applications. It’s a fairly small game, taking up about 50MB when installed.

Booting up for the first time takes you through setup, where you get to customize your character, name him (you can’t be a girl), give him his initial attributes regarding Fitness, Tact and Skill, and choose what team he’s on. Being that the only soccer team in the world I know of is the Pittsburgh Riverhounds, (remember how I said we don’t care about soccer? Half the city doesn’t even know we have this team) I chose them for my character. They come up in the list of choices as the “Pottsburgh Riverhounds.” It is to be assumed that this is the developer’s tactic for using real team names without official licensing. My first game was against the Cliveland (should be Cleveland) City Stars. It also says the Riverhounds play at Chertiers Valley High School (should be Chartiers), so the clever misspelling of words continues throughout the list.

After everything is set up, you get to the main menu of the game. This is where you trigger everything you do. It’s actually quite brilliant, and this is where the whole “lots more to do than just play soccer” element begins. You have to manage your personal soccer skills, your fitness, your relationships, your vices, your intake, your training, and all sorts of other things. Before you ever play a game, you need to go do some training on kicking, dribbling, passing, etc., to learn how to play. Seriously, you need to, or you’ll be completely sucktacular. The game also never really tells you which buttons do certain actions (took me 20 minutes to figure out that “Z” was shoot), so training helps figure all that out before you get into a real game.

So, what’s it like to actually play soccer? Tougher than biting through Batman’s chest armor. You only control your one character, not the entire team, which is different from most sports games. It also ups the difficulty, because unless you actually know something about soccer, it’s impossible to know where to put your guy to ever get your foot on the ball – especially in the beginning when you are a horrible novice on a field with better, faster fellows. Without a doubt, serious soccer enthusiasts will be much better at this game.

The graphics look decent and are what you’d expect. They do try to go that extra bit and include elements they could have left out, such as weather, and the fans cheering, and all that good stuff. Really, every single element of a big-name soccer title is here. Players get fouled, they can get injured and leave, there are substitutions and changes, clocks and counters on-screen, vocal sound effects as well as SFX and music; it’s all in the bag. The characters and movements can lag a little and be hard to control, and the AI can sometimes be downright dumb, but it plays fairly well. Every now and then you might run circles around the ball trying to get it thanks to the controls, but that’s only if you’ve got the skills to get near the ball in the first place.

The way you play, whether you win or not, and your contributions to the game effect your personality and bank at the end of the game. Maintaining relationships is key to success, and there’s a lot you can do with those funds… 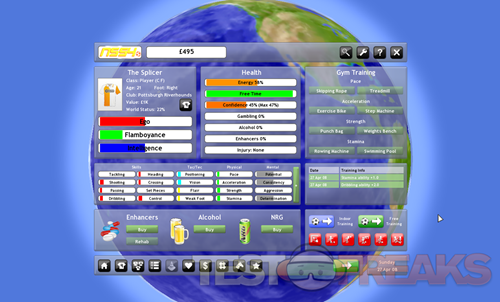 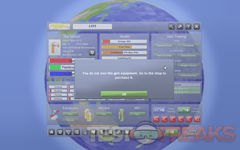 The extras are what really make this game different from your everyday FIFA, and make for an RPG style development of your character. You can spend your extra bucks on steroids or juice to get energy for training (with consequence), you can go gambling at the casino or the racetrack to win quick or lose big, you can swim in the pool or buy workout equipment to tone yourself and become a big fancy David Beckham soccer stud – the list goes on and on. It’s what makes this game rad, and will rewrite your opinion of what it means to be a sports game.

While the game’s graphics are still very primitive, the move into 3d was a good step for the series. The vast amount of control over your player and his development is totally slick, and the soccer part isn’t too bad either. Certainly easier for real soccer players or fans, the game is worth a try by anyone. 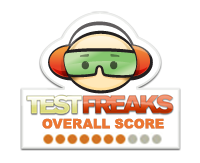 Pros:
Rich development system
So many things to do aside from just soccer
An amazing showcase of independent game making

Cons:
Character movement can be fickle
Controls can be difficult to get the hang of