At this past Spring’s Pepcom press show I was able to meet with the people from Phiaton, makers of high end portable audio equipment. Phiaton is a relatively new name to the headphone field as it was started in 2008; however its parent company Cresyn Co. Ltd has been around since 1959 making OEM audio equipment found in many well known brands. Thus this "new" audio accessory company actually has a wealth of experience to draw on for their audio products.

Phiaton was kind enough to provide technogog a preview sample of their soon to be released PS 210i Earphones. Based on the currently available PS-210, this new model adds a microphone cable making it a perfect compliment to one’s iPhone, Android, Blackberry or other smartphone device. Now you can listen to your music and pick up calls without having to take off your earphones or handle your phone.

Let’s take a closer look at what Phiaton has to offer with the PS 210i.

Packaging: The PS 210i Earphones arrives in a clear plastic box with the headphones and microphone displayed on the red cardboard inner package. The front advertises its iPod and iPhone compatibility which seems to be the market that Phiaton is targeting. Missing from the box is the "Made for iPod" logo which means that Phiaton probably did not pay the Apple extortion, I mean "certification" fee. 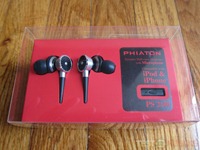 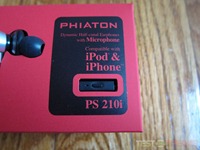 On the back of the package we see the Features, Specifications and Package Contents listed. 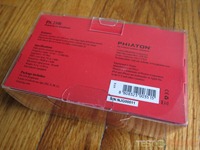 The inner package is a light weight red cardboard box which is intricately folded shut making it a bit of a puzzle to open without ripping it to shreds. Once this origami inspired box is opened we find the PS 210i Earphones along with a leather carrying case, three additional silicon ear tips, the Product Registration Card and Warranty Card. 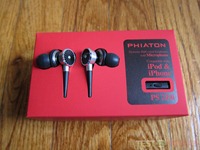 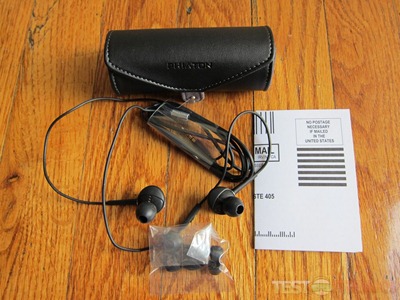 Build: The PS 210i is composed of aluminum, plastic and rubbery covered cables. It is marketed as a "half in ear" style as opposed to "in ear" design. The headphones are primarily black with an aluminum body where the ear pieces meet the cable. There are three sections to the earphones – the aluminum housing the dynamic driver, the oval shaped middle which has the bass drivers and the earpieces themselves. 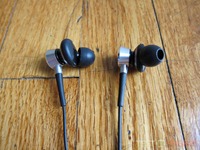 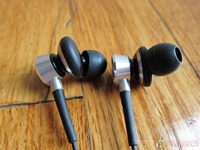 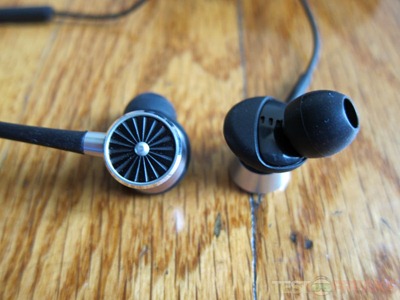 Off the back of this aluminum section we see a radial pattern which is probably for aesthetic design. 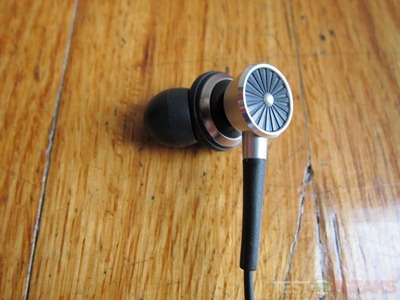 Just behind the ear piece is a large oval section that contains the bass drivers and acts as an additional barrier to filter out extraneous environmental noise. The ear pieces are angled to sit in one’s outer ear canal and are aimed forward similar to the earpieces on a stethoscope. The ear tips are composed of a soft silicon material and come in four size options to fit most every ear canal size imaginable. 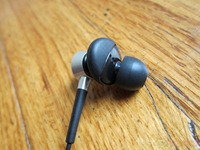 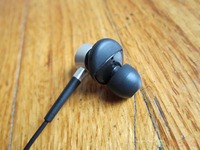 One thing not included that some other brands offer is an ear wax barrier. Keeping the gooey auditory canal material from the actual speakers should be of paramount importance. Phiaton should include a small filter screen to cover the ear piece speakers thus maintaining long term optimal acoustic quality. 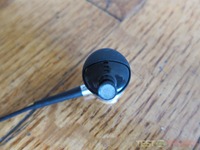 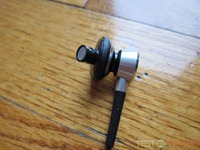 The ear pieces split off via a Y-Splitter into two equal length cables. An aluminum Phiaton labeled splitter separates the main cable from the right and left headset. A black plastic cord adjuster helps regulate the split of the earphone cables. Coming off the right ear piece cable is the microphone which is composed of black plastic and has a button used for muting/unmuting music and answering or ending phone calls. On the iPhone 4 if you press and hold the button then the Voice Control screen will be activated. 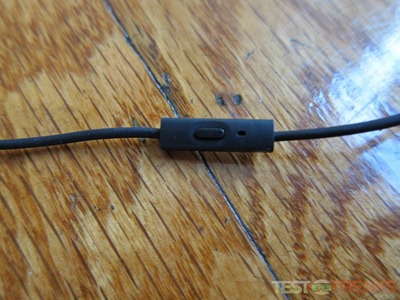 The cables are made of a soft rubber material. Phiaton provides plenty of cable length for these earphones. I was able to use the PS 210i at the gym without having excess cable get in the way.

The cable ends at a straight rubber reinforced 3.5 mm jack. The only issue I found with the construction of the PS 210i is at this 3.5 mm jack connection. This seems like the weak link to the PS 210i as it is the most likely candidate to break after prolonged tension. 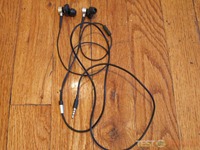 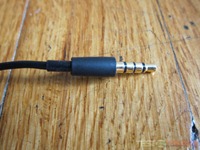 A heavier L-shaped plug such as the one seen below would be a better build option. 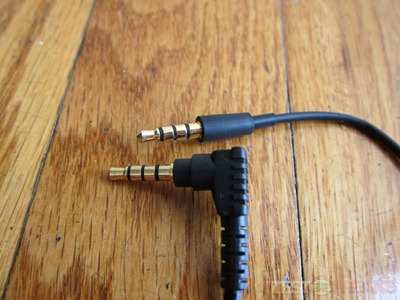 Extras: Phiaton includes an oval shaped leather carrying case to keep your PS 210i earphones protected when not being used. I prefer this carrying case over the loop around versions found with other brands as there is less risk of cable strain without the wrap around loop. This case closes with a leather snap closure; there is an embossed Phiaton logo just above the top flap of the case. 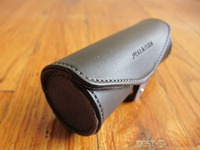 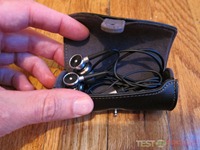 Besides the attached ear tips, Phiaton provides three additional sizes for proper fit. The medium tips are the ones that come pre-affixed to the PS 210i. 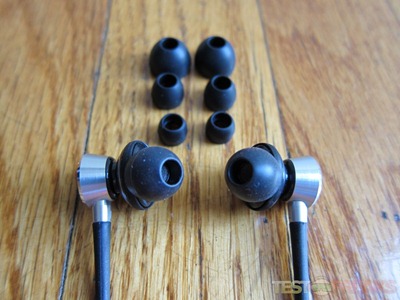 Style: Phiaton designed the PS 210i to look as good as it sounds. The black and aluminum aesthetic blends well with any device that you choose to use in conjunction with it. 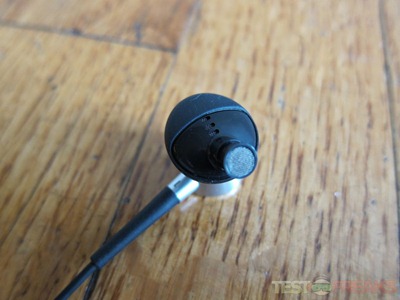 The trade off for this comfort is weaker sound isolation but I did not seem to notice external environmental noise with them in place except during breaks in songs or quiet sections of music.

Acoustics: With the PS 210i Phiaton’s goal was to provide an accurate representation of the source material rather than to over saturate the listener with excessive highs or lows. This is a major problem with a lot of headphone designs as the market wants oversaturation found in brands such as Dr. Dre’s Beats headphones which over extend the bass.

Happily I am able to report that the PS 210i lets the music speak for itself as it reproduces sound that is accurate to its source material. For instance the acoustic guitar work of Rodrigo y Gabriela’s Tamacun really highlighted the PS 210i abilities. Listening to that song felt like I was in the studio with them playing in front of me.

The PS 210i produces a crisp sound keeping the treble more out in front than the mid and bass. Listening to Rush’s La Villa Strangiato also highlighted the PS 210i’s strengths as Geddy Lee’s bass provided a rich bottom to counterpoint Alex Lifeson’s string work and Neil Peart’s percussion was punchy and driving.

Phiaton’s PS210i provide a pleasant listening experience as there was never any distortion or over brightness. I especially appreciated that the bass was present and easily heard but not overpowering.

I generally like to listen to tracks from Pink Floyd or Tool when testing out new headphones because there are so many layers within their music that you can discover new sounds or musical nuances when listening with a quality set of earphones. During my Floyd/Tool test, the PS 210i did not disappoint as listening to Tool’s Forty Six & 2 revealed previously un-heard sounds on one of my most listened tracks.

The PS 210i does a phenomenal job of keeping the low end along with the mid range sound rich and smooth.

Microphone: This part of the PS 210i is what separates it from the standard PS 210 version. The good news is the remote control of music playback works well. Playing and pausing songs can be done with a button press. There is no volume switch so you still need to control the volume directly on the smartphone being used.

Answering and disconnecting calls couldn’t be easier. I tested the microphone by calling a few people and then using the Apple Voice Recorder on my iPhone 4. One person told me I sounded muffled but I think the connection quality was less than ideal as two other said they thought I was talking into the phone directly. My voice recording sounded clear and became even louder when bringing the microphone closer to my mouth.

Since the main feature of the PS 210i is the inclusion of the microphone, it is good to know that it sounds good on both ends of the conversation

Although a relatively new name in the headphone market, Phiaton has decades of acoustic build and design experience and use this knowledge to make the PS 210i. This model strikes a balance between in-ear and over ear sound quality.

The included microphone is what differentiates the two 210 models. For those who live on their smartphones such as the iPhone 4 then the PS 210i is the Phiaton model to choose as it allows the user to keep their headphones on during phone calls. Plus having a remote on the cable is especially handy for those who exercise using their devices for music playback.

For the audiophile looking for a comfortable pair of earphones that sound terrific then the PS 210i are the ones to buy. They are priced at a reasonably around $100, which is in line with other higher end earphones. The PS 210i provides a crisp clean bass and excellent mids and highs without having to rest totally in the user’s ear canal making them very comfortable.