Wicked Audio has garnered its reputation on stylish looking headphones at reasonable prices. Based on reviews most of their headphones have been well received in terms of their sound quality. Empire Brands, Wicked’s parent company is looking to attack the pro market with the release of its Solus headphones. The name Solus is derived from the Latin for “Be Yourself”; a philosophically named headset sounds much better than a model number like KSP-212, doesn’t it?

While the retail price lists them at around $100 they can actually be found online in the sixty dollar price range making them an intriguing purchase if their sound is on par with the rest of the package. Let’s take a closer look…..

The Wicked Audio Solus arrives in a black and red cardboard package with an image of the headphones in profile on the front. On the left-hand side of the box is a description of the product along with a list of specs. The back shows a diagram of the headset with highlights of its features along with another list of specs. 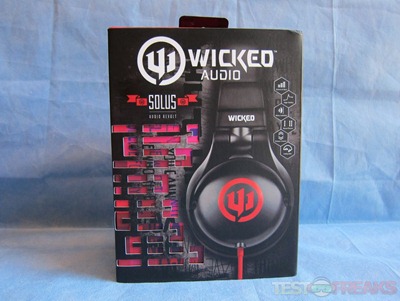 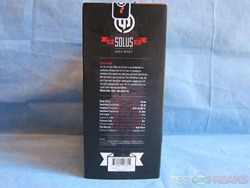 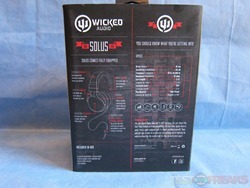 The outer box is actually a sleeve that slides off to reveal a red inner box with some trendy slogans such as “shut up sit down”. I wonder what Howard Stern’s father Ben Stern would think of his famous line being printed on a headphone product box? 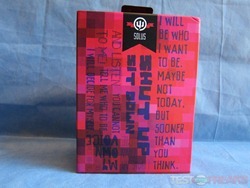 Opening the red inner box reveals the Solus headphones resting in a velvet covered plastic holder. Also found in the box is a scratch guard cloth carrying case, extension cable, user manual and ¼” headphone jack adapter. According to the content listing on the outside of the box there was supposed to be a Wicked Audio sticker, however this review sample did not contain one. 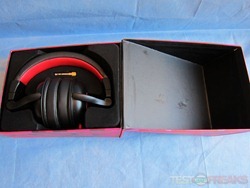 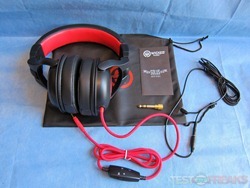 The Wicked Audio Solus has a black and red color scheme and is primarily composed of plastic. This is an over the ear headset that is partially collapsible making it easier to transport. Currently Wicked Audio only offers the Solus in red and black.

The first thing you notice about the Solus is its size. These are a big set of “cans”. Here is a size comparison against one of the various Monster Beats models. 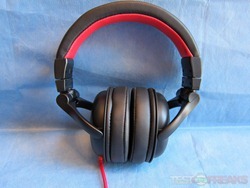 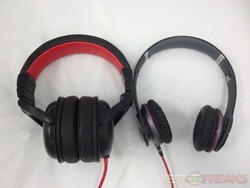 A stealth hinge allows the ear cups to be folded towards the headband when not in use. This hinge also acts as a swivel allowing the ear cups to be facing inward or out. An extender sits below this hinge providing an additional inch of extension for those with larger heads. 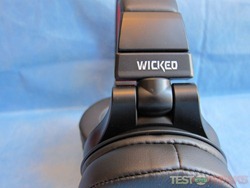 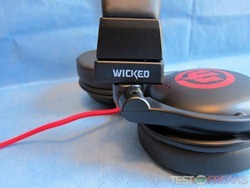 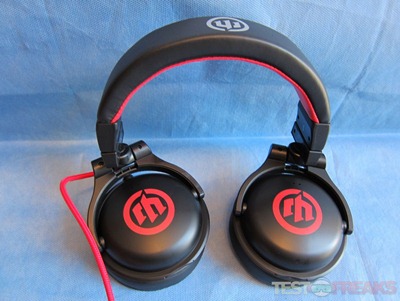 The speakers feature a red cloth covered 40 mm Neodymium driver with black leather covered foam on the outside. The Wicked logo is found on the outside of each ear cup. Coming off the right headset is the speaker cable. Unlike the Beats line this audio cable does not detach from the earpiece. 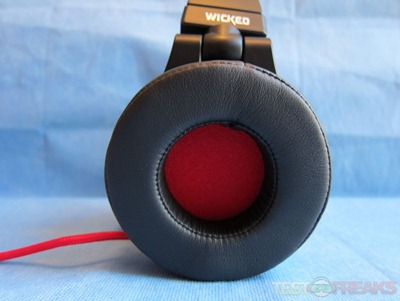 Between the speakers is a well-padded adjustable band that is designed for comfort especially for prolonged use. On the top of the band is the Wicked Audio logo. 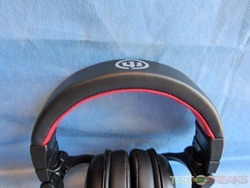 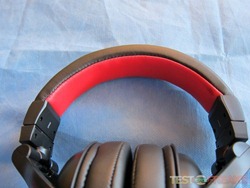 Wicked Audio provides plenty of padding on both the earphones and headband to make the Solus comfortable for extended periods of listening.

Overall the construction of this headset is solid despite being primarily composed of plastic.

The audio cord is nylon wrapped helping to keep the cord from tangling when the Solus is in transit. One-quarter of the way down this cord is a volume control dongle along with a switch for mono or stereo playback. The mono setting is for those who plan on using the Solus while DJ-ing; this setting allows all the sound to come out equally in each speaker.

At the end of the cord we find a gold plated connector designed to provide high-quality music playback from the source device. 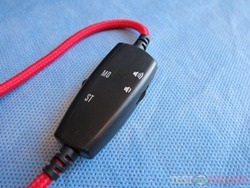 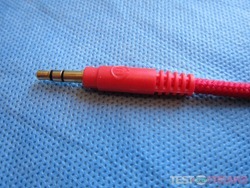 A nylon satchel with the Wicked Audio logo is provided when traveling with the Solus. For those who need an additional length of cord extension cable is included along with a 1/4-inch adapter. 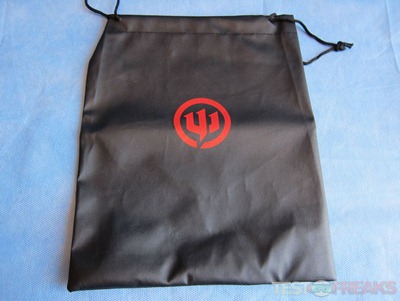 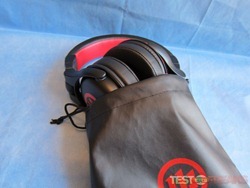 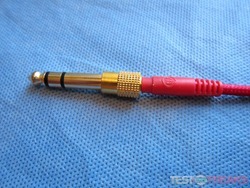 Wicked Audio’s first foray into the high-end headset market is a good start. While they seem to be targeting the bigger names such as the Beats line, their pricing is still in the lower end making the Solus a good value. They currently can be found online for under

Cons:
-Can sound too bassy
-Highs and mids overpowered by low end