If you’re an enthusiast and even if you’re not then you know the name Futuremark, they make benchmarks for your computer and video cards. They’re known the world over and their software is widely used in testing and comparing systems to each other. They’ve recently released their first, long awaited game called Shattered Horizon. It’s a first person shooter based in space, zero gravity fighting basically. The premise behind the game is that it’s set 40 years into the future and we’re mining the moon, but due to a catastrophic mining accident the moon essentially blows up leaving fragments everywhere. You get to wear a space suit and let the bullets fly while fighting in one of four areas. One of the unique things about this game is that it’s even, in that everyone has the exact same weapons and equipment, so only the most cunning and skilled will survive the confrontations. So read on to learn more about the game and for your chance to win a free copy of it via Steam…

When you start Shattered Horizon you’re basically just thrown into combat, there is no single player game, though I wish there was one. The premise behind the game would make for a great single player game I think, it’s a shame they didn’t do a single player campaign. When you start it’s standard stuff, find a server, pick a side and then start playing. There is a briefing before each match to let you know where you are, and a few tips as well. 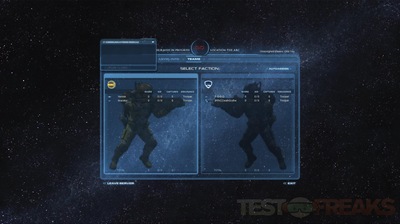 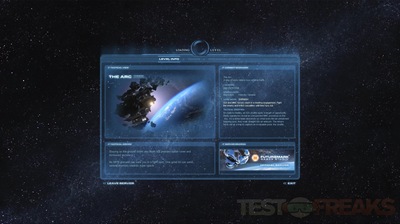 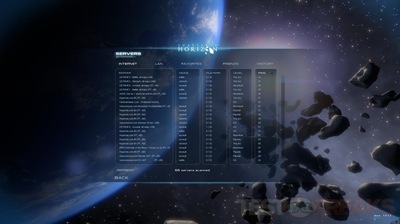 I played Shattered Horizon on my gaming PC that’s hooked up to a 47” HDTV. It’s got an Intel C2Q9650 in it with an XFX 4870 1gig and 4 gigs of ram running Windows 7. I played at full 1080 resolution and had no real problems, most all of the settings were turned to high, with the exception of Ambient Occlusion being turned off. The system requirements are fairly high for Shattered Horizon, so low end video cards and systems need not apply and you’ll only be able to play with Windows Vista or 7 since it’s a DirectX 10 only game.

While playing you’re in a space suit with a limited hud that has basically just radar on it. You gun is a rifle that also shoots three types of grenades, EMP, ICE and MPR (which is your basic blowing up things grenade). You gun also has a bayonet for up close and personal combat. The gun is equipped with a long range scope as well, that’s unique in that when coped you’ll fire 10 round bursts at your target. The gun itself has an ammo counter on it, along with the type of grenade you’re using. 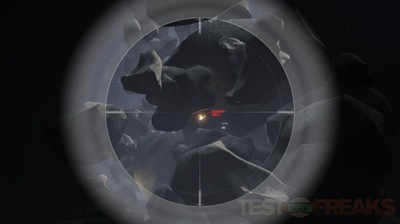 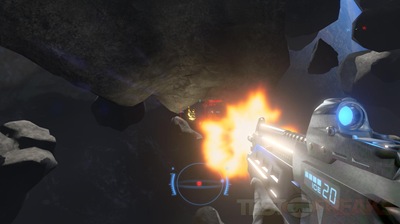 Here’s the first of two videos of gameplay for you:

Shattered Horizon is a multiplayer shooter played in zero gravity. Join your friends in intense 32 player battles to control hollowed-out asteroids, huge fragments of Moon rock and the ruined remains of the International Space Station.

Familiar and intuitive FPS controls let you take full advantage of these distinctive environments. Use your rocket pack to move freely through space and then land on any surface. Engage enemies in furious firefights, or ambush them from unexpected angles. Zero gravity offers you freedom of movement that cannot be found in any other game.

Attacks can come from any direction so keep your eyes peeled for the telltale signs of enemy movement. With your rifle at the ready you can handle anything the enemy can throw at you. A rapid fire weapon with a generous clip, it is both accurate and deadly at medium range. The stealthier combatant can engage the weapon’s scope and prime the chamber with a powerful 10 shot burst, lethal over longer distances. And for those who like to get up close and personal, the rifle’s retractable bayonet is a fearsome tool in the right hands.

Fire ICE grenades to provide cover or be more aggressive by using EMP grenades to disable enemy electronics or MPRs to blast enemies out of cover. Your weapon will save your life so hang on to it. If you let go of your gun, chances are you’re already dead.

Use your rocket pack to fly freely through space and then land on any surface. Engage your enemies in furious firefights, or ambush them from unexpected angles.

Join your friends in action-packed 32 player battles fighting to control hollowed-out asteroids, huge fragments of Moon rock and the ruined remains of the International Space Station.

Familiar and intuitive FPS controls let you take full advantage of the zero gravity environments while astonishing graphics and advanced lighting effects immerse you in the cold reality of combat in space.

I won’t lie to you, when you first start playing Shattered Horizon it can be difficult, you’re moving in three dimensions and it’s not just like any other FPS where you can run and gun. It will take you a bit of time to get accustomed to the controls, but luckily you can remap all of the keys to your own preferences. This works well if you’ve got a mouse with multiple buttons to reassign functions to the mouse buttons. Moving around involves thrusters on your suit, it can take quite a bit to figure the controls out and which way is up. I do like the fact that you can rotate to any view, the default is pressing the right mouse button and moving the mouse, this moves you all around. Firing a gun in space can be difficult, the recoil will move you a bit but your suit compensates for it, unless you’re in sniper mode firing off ten rounds at a pop then you and you gun go for a small ride, and it takes a few second to reacquire the target if you didn’t kill them the first time.

The graphics are beautiful really, while I was playing the beta they had a special server that was basically empty so you could just fly around and practice, I spent quite a bit of time just flying around and admiring the scenery especially the view of Earth. 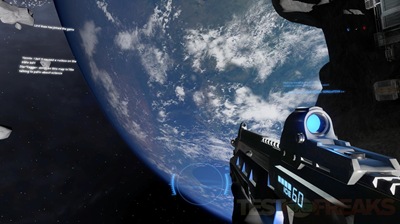 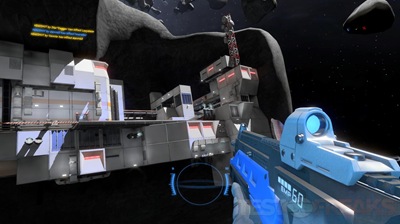 There are four areas to fight in with more coming actually, you’ll be doing a lot of fighting on and around rocks, with quite a bit inside mining stations as well. The game can be dark at times with dust all around, and depending on where the sun is as well, looking into the sun is not recommended as it’s very bright. 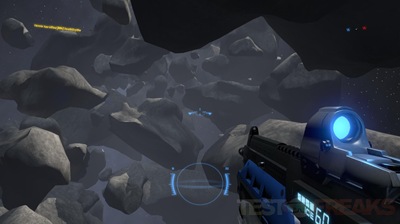 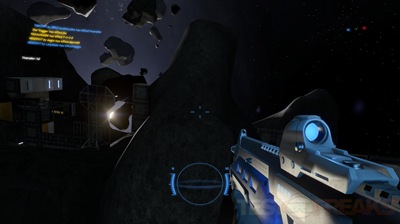 I like the fact that everyone has the exact same weapons, this way it’s equal and players will truly have to rely on their own skills at playing the game. Yes you’ll have to practice to get good at it, I’ve put in a few hours, and I’m still nowhere near being good at the game.

As is, Shattered Horizon has the potential to be a huge success, as long as Futuremark keeps supporting the game with updates to maps and modes of play. Right now you’ve only got four maps that honestly all look rather similar, you can play through all of the maps and really they look pretty much the same, but then again you won’t spend much time looking at the scenery either, that is unless you want to die very quickly.

Here’s the second video for you to end this:

To get a free copy of Shattered Horizon just leave a comment below, I’ll pick a winner on the 25th, right before Thanksgiving so you’ll be able to play over the long holiday weekend! Make sure to fill in the email address so I can contact you.

Shattered Horizon is a unique game, it offers true zero gravity fighting where things are pretty much even between the players since they’ve all got the exact same armaments. You’ll truly have to rely on your skills if you want to do well in this game. Futuremark has a potential hit on their hands truly, as long as they keep up with additions to the game like new maps and new modes of play. If you’re into multiplayer games then you’ll certainly want to give this one a try, it will offer you an experience like no other game you’ve played.

Pros:
+Redefines the FPS genre
+Players have the same equipment for an even playing field
+Beautiful graphics
+Fun, fun and more fun
+Zero Gravity combat for the win!

Cons:
-Only four levels that look very similar
-Limited modes of gameplay
-High system requirements
-Can be tough to play at first