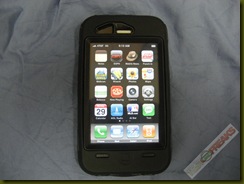 OtterBox makes tough stuff. If you have an electronic device you want protected, then OtterBox is the place to go. They feature cases for iPods, Blackberrys, Motorola, Laptops, etc. Their cases range from waterproof to shock protection to environment impermeable.

When Apple released the iPhone 3G with the curved back, they made previous hard cases for the 1st generation iPhone obsolete. To provide optimal protection for the new iPhone 3G, OtterBox has released the Otterbox for iPhone 3G Defender.

Due to the large screen surface area, both versions of the iPhone are prone to catastrophe. Many cases protect the external housing, but due to the nature of the screen, leave that area exposed to danger. The Otterbox for iPhone 3G Defender is one of the few cases that provide full coverage protection for the iPhone. They took their original iPhone Defender case and updated it for the iPhone 3G.

The Otterbox for iPhone 3G Defender comes in a predominantly yellow colored cardboard box. On the front is the Otterbox logo and mascot with a picture of the iPhone 3G Defender case a short description of the case. One side of the packaging lists the features of the case and the contents of the box of the other side. Finally, the back of the box shows some action shots of where OtterBox products can be useful. 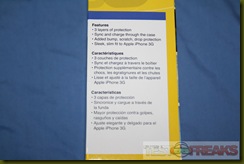 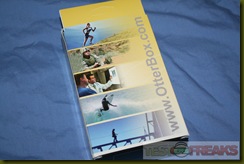 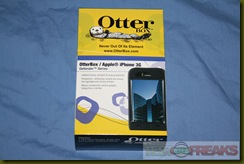 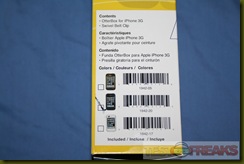 Inside the box one finds the Otterbox for iPhone 3G Defender, a ClipStand holster, the instruction sheet, an Otterbox sticker and an advertisement.

The Otterbox for iPhone 3G Defender is comprised of a black Polycarbonate case and has a black Silicone skin, there is a thin clear membrane that covers the screen. 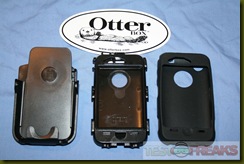 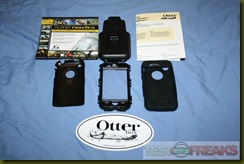 The ClipStand holster is also composed of black Polycarbonate and has a belt clip that rotates 360 degrees. Besides acting as a holster, it can work as a stand for watching media on your iPhone 3G. 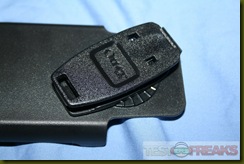 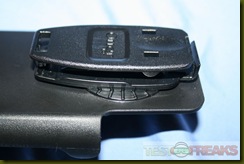 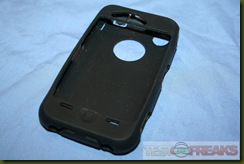 Separate the Polycarbonate case by prying the three clips (two on the side and one on the top) apart. 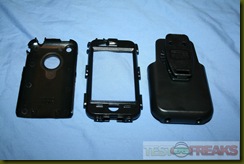 Once the shell is opened, remove the protective film from the inside of the front screen membrane. Next, slide the iPhone 3G into the upper portion of the shell and then clip the back of the shell to the front. 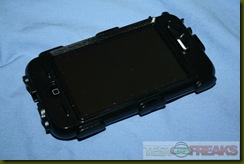 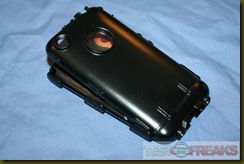 Next, wrap the Silicon Skin onto the case. There are fixation points on the front, back and side of the shell. 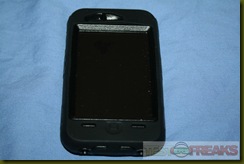 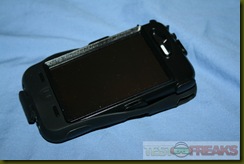 Viola, your iPhone is now protected from most forms of punishment! The Otterbox for iPhone 3G Defender fits easily into the holster and has tabs to lock the case into the ClipStand. 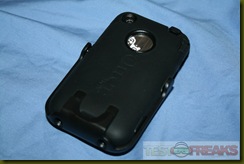 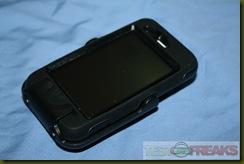 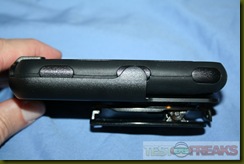 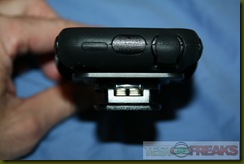 The Otterbox for iPhone 3G Defender provides dust and dirt protection via flip up silicon tabs that cover the dock connector, the headphone jack and the mute switch. 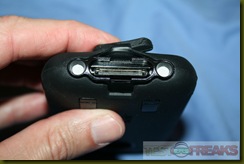 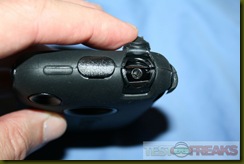 The silicon skin permanently covers the volume, home button and power switch, there is a filter opening for the earpiece above the screen. 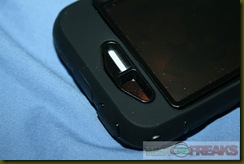 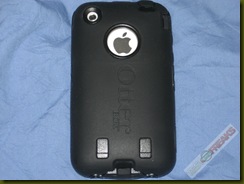 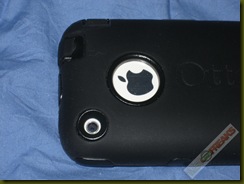 The bottom of the case has two more filtered areas which cover the speakers adjacent to the dock connector.

For all intents and purposes the iPhone 3G is sealed from the outside environment; although, it is safe from minor splashes, Otterbox does stress the Defender is NOT intended for protection against water intrusion.

One of the issues that plagued the original iPhone Defender case was the inability to access the mute switch, this has been remedied with the flip up silicon tab covering it.

Holstering the iPhone 3G into the ClipStand with the phone facing forward allows each access and removal; Unfortunately, it is a little too easy to knock the iPhone 3G Defender out of the ClipStand as my daughter easily demonstrated when I picked her up.

However, if you wish to have the iPhone 3G sitting with the face into the holster, then the removal of the iPhone 3G Defender is more difficult. In fact, the holster does not allow the case to slide out unless the two side tabs on the holster are pulled apart. I wish there was a happy medium for keeping the iPhone housed in the ClipStand.

The flip down silicon allows syncing with a cable, but would require the iPhone 3G to be removed from the case if you were using a dock for syncing.

Another quibble I have with the case is that it does mute the volume of the phone, for instance the ringer is definitely lower in volume than when the iPhone 3G sits naked.

If you like to have a sleek form factor for your iPhone 3G, then this is not the case for you. With the Otterbox for iPhone 3G Defender in place, the svelte iPhone 3G takes on the form of an older PDA. This sacrifice in style does provide excellent protection from the environment and most particulate matter. Whether you want to lose the aesthetic of the iPhone 3G is a matter of personal preference.

I personally like the security that the Otterbox for iPhone 3G Defender provides my iPhone 3G, knowing it can withstand the occasional fall or splash is very comforting.

39 comments for “The Otterbox for iPhone 3G Defender”