As we’ve mentioned earlier, Songbird has left the Linux flock and gone on to perceived greener open source pastures. But what are the Linux faithful to use to replace this one time music player gem that was heralded as the alternative to iTunes?

Apparently there are a lot of choices. In fact, I doubt if Songbird will hardly be missed. So what are these Linux alternatives to Songbird? Let’s take a look at our 10 favorites, presented in no particular order. 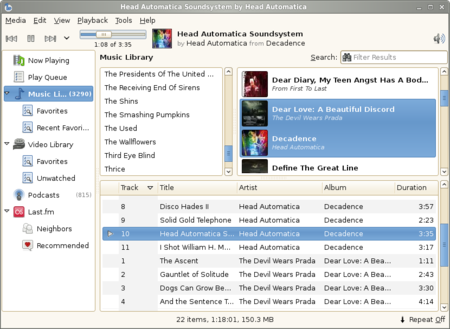 Banshee stands heads above the crowd in its video management capability, and it has the unique capability to sync videos with your iPod. But it isn’t just videos that Banshee excels at, since it has a very capable music manager as well. You can queue up your own music, or let the auto DJ spin your tunes. There is a shuffle play mode, and the Banshee will even automatically grab the album artwork for you as you listen.

Banshee will sync with your iPod, Android, and other devices. You can also import media from your portable media player, making it easy to group and manage your collection. Smart playlists and a potent search rounds out this versatile player. 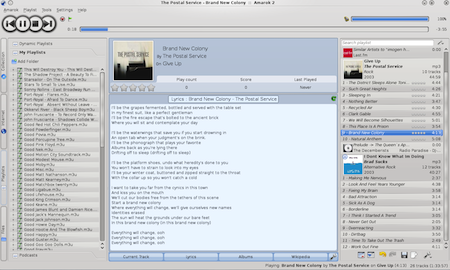 With some of the comments found in forums about Amarok, you would think that it was the best media player/manager on the planet. And the praise is well deserved, considering what Amarok has to offer.

From a powerful collection manager that handles tagging, renaming, and sorting abilities to a popup dropper that simplifies dragging and dropping, Amarok has a very well designed interface. A bookmarking system lets you mark positions in individual tracks, and automatic bookmarking keeps your place in those podcasts and audio books. Need to move your physical files due to space issues or a new drive? No problem, since Amarok will keep track of the files, leaving your statistics and playlists intact.

If for some reason you find the interface lacking, then go ahead and make it fit your needs – Amarok incorporates a scriptable API that has the support of community developed scripts. 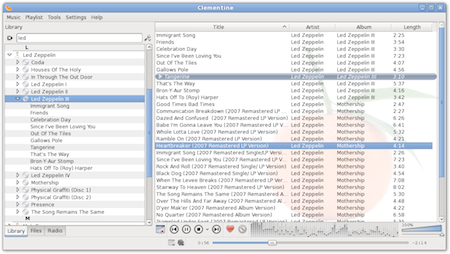 Originally a port of Amarok 1.4, Clementine has since grown into a capable QT4 music player. Keeping a great interface design from the older Amarok, Clementine allows you to edit music tags, download missing album art, and fully search your music library. Notifications are provided through support of libnotifiy (Linux) and Growl (Mac), and both M3U and XSPF playlists are supported. 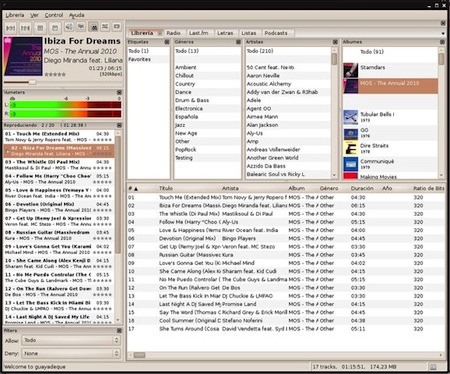 No doubt the new kid on the block, Guayadeque is being developed by UbuntuForums. While not as fully featured as some of the other players listed here, Guayadeque has a lightweight interface that makes it quick to play music. The app uses a tabbed display interface, perfect if you like that style.

Just because Guayadeque is more lightweight than the other players does not mean it skimps on features. You will find such features as automatic album art download, podcast subscription and automatic downloading, shoutcast support, dynamic play lists, tag editor, and more. There is even a smart play mode that selects tracks based on your music selections. 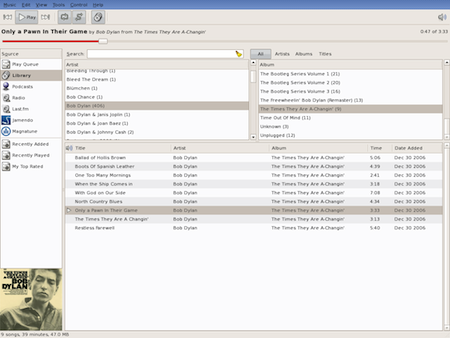 If you’ve been a Gnome user, chances are you’re at least a little familiar with Rhythmbox. Being the default music player for Gnome, you may have actually stopped using it to go to Songbird. If so, now would be a good time to give it another look.

Modeled after iTunes, Rhythmbox makes it easy to browse your music library… and it has comprehensive audio support through GStreamer. You will find internet radio support, and there are visualizations to enjoy. Rhythmbox will fetch your podcasts for you, and it incorporates the Magnatune and Jamendo music stores. Rhythmbox will also download album artwork and lyrics, keeping your media collection robust. 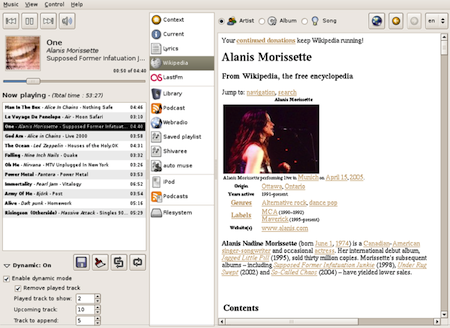 At first glance Listen may look a lot like Rhythmbox, but some like it even better. You will find Listen to be a well featured music player, with dynamic playlist support, automatic lyric retrieval, and even Last.FM integration for playlist support. But Listen goes one step further and will look up the current track on Wikipedia right in the browser itself. Listen lets you know more about your music than you ever did. 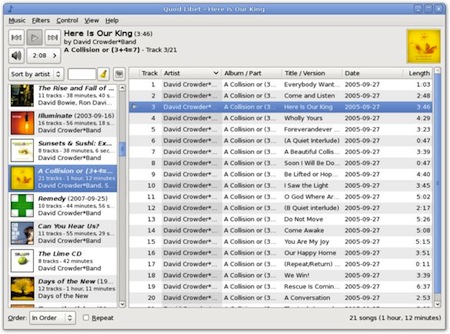 Quod Libet is a GTK+ based audio player written in Python, and it incorporates the Mutagen tagging library.  Quod Libet is a lightweight player, and it can handle a very large collection of songs without choking. The interface is highly customizable, but the program’s strength lies in its advanced tag usage and playlists building based on regular expressions – if you are looking for such features.

Audacious is a great choice if you’re looking for a lightweight music player that is fully skinnable, supporting both Winamp and XMMS skins. Beyond that, you will find visualizations, sound effects, and extensive plugin support. If you want a capable player that saves on screen real estate, or has a favorite Winamp skin you want to use, then give Audacious a look. 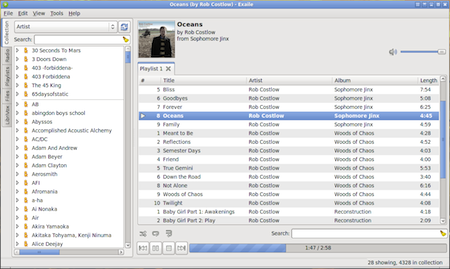 Exaile is a popular choice for a Linux music manager. It will fetch album art and lyrics for you, and interfaces to Last.FM. Exaile supports many portable music players, and incorporates internet radio such as Shoutcast. Tabbed playlist support is also included, allowing you to have multiple playlists open. There is also an advanced tag editor, allowing you to keep your collection up to date.

You might note that we do not have a screen shot for MPD, and for good reason – it is a Daemon instead of an app. However, if you are a Linux power user, then MPD might be just what you are looking for. While it can be a pain to set up for anyone not well versed in a command line… once installed MPD will probably be the handiest tool in your audio belt. The client-server model of MPD requires more space to discuss than I can allow here, but if you are a power user and want complete control over your music (including multiple client support) then head over to the MPD Wiki now.

So, here we have 10 alternatives to Songbird on Linux. Some of them might not fit your needs, but a few might be even better than the original for your uses. One thing is certain, media support on Linux is stronger than ever. And I hope that is a good sign of things to come.

27 comments for “10 Linux Alternatives to Songbird”