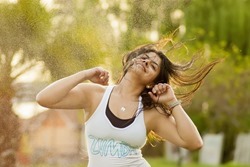 Most people don’t associate exercise with some of the most popular video games around. The truth is that in the past decade, more video game companies and console manufacturers have dedicated development to video games that incorporate movement somehow. Besides helping put players into a fully immersive gaming experience, movement games can also give players new exercise opportunities. Now, a new generation of video gamers can get onto their feet and be active. Here are 10 great titles to try if you want to exercise with video games.

When the Zumba fitness craze took hold of the world, video game companies noticed. In 2010, “Zumba Fitness” was introduced for Nintendo Wii, Xbox Kinect, and PlayStation Move. The game has players participating in this hot dance workout and tapping their toes to the best in Latin and popular music. With plenty of workout options on the menu, this game helps Zumba enthusiasts stay entertained and active.

The most recent Xbox console, the Xbox One, features a new workout from the fitness company Beachbody. “Beachbody P90X” is a video game that incorporates some of this strenuous workout’s signature moves, such as pike presses, scarecrows, pour flys, and more plyometrics. The workout game includes a free routine of the first 30 days of workouts, with options to add on to the schedule with additional exercises.

Nike has also played a part in helping gamers be more active with its title, “Nike+ Kinect Training” for the Xbox system. Users can help get into better shape by participating in several different competitive sports activities. In this game, players love how they can go from different settings, such as the fitness studio, the racetrack, or the gym to get some variety.

If you love to dance, you can get your groove on with one of the video game options for dance lovers, “Just Dance 4.” This game is a sequel to a popular franchise that allows players to fine-tune their stepping skills and get a workout at the same time.

In 2015, cyclists were excited about the newest entry in virtual reality video gaming, “Widerun.” Widerun allows cyclists, both amateur and professional, to get more intense training without stepping foot outside. Bikers can simply connect the game to an indoor cycling setup and feel like they’re navigating a real-life track or route in a city setting. For people who are addicted to riding, this is a great workout option.

The success of the television show, The Biggest Loser, has spawned several products related to the show’s philosophy. These items are supposed to help viewers get fit and finally reach success with their weight loss. One product that has helped bring the show’s exercise routines to viewers is “The Biggest Loser Challenge” video game.

One of the first exercise video games that used the new motion-capture technology was the Wii console’s “Wii Fit.” In order to get access to the new types of workouts for this game, users need an additional accessory, the Wii balance board. The game also allows users to track their progress along with their weight and endurance.

Activision Blizzard, headed by CEO Bobby Kotick, also published a fitness video game a few years ago called “10 Minute Solution.” Designed for the Wii system, this game focuses on exercise solutions for people who don’t have a lot of time. The game’s developers teamed up with the producers behind the fitness video series with the same name. Fitness addicts can choose from a variety of short, 10-minute workouts and combine different exercises for a routine that strengthens the entire body.

The Xbox system released a series of fitness games, starting with the title, “Your Shape: Fitness Evolved.” This exercise game has spawned several sequels that have added to the workout options for the Xbox console. The game features a number of high-quality workouts from the editors and experts at popular fitness magazines. Additionally, players can add on to their experience by purchasing upgrade packs for specialty workouts, such as boxing or toning.

Most exercise video games still involve some sort of traditional workout style, whether it’s cardio, yoga, or calisthenics. Xbox’s “Kinect Sports Rivals” aims to make video game exercise more fun and focused on interactive sports activities such as bowling, soccer, tennis, and target shooting. This workout based on fun activities instead of reps makes it easier for players to be engaged and stay consistent in their exercise routine.

Using fitness video games as part of your exercise routine can help you develop a stronger and healthier body. For those who don’t love to go to the gym or do traditional exercise, a video game that incorporates fitness is a great solution to finally get a toned and physically fit body.

← Will the Recent ICO Ban in China Impact on Currencies?
Can Apps Really Help You to Concentrate Better? →