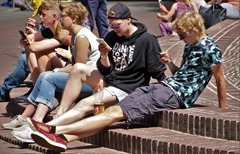 Most parents give their kids a cell phone because they know it helps them in becoming tech savvy. This is due to the fact that they use the device to keep in touch with friends via the internet and also play mobile games. The problem is that majority of the parents don’t bother to check how their kids use the mobile phone. A child that uses a cell phone is actually vulnerable to all manner of evils. Keep in mind that we live in a rotten society where some people have a tendency of preying on innocent young ones. There is also the likelihood of a child becoming a victim of cyberbullying. All these problems can be kept at bay by monitoring your kids cell phone. Below is a list of benefits that you will begin to experience when you start keeping an eye on your child’s phone.

The internet is full of garbage that should not be accessed by children. In fact, some of the adult content that is available on the internet can have a negative influence on your child’s behavior. Besides that, your kid can be introduced to sexting by his peers without your knowledge. Sexting refers to a situation where kids take nude photos of themselves and send them to each other.

Such images can be used to taint the image and reputation of your child in future. The best way of ensuring that he doesn’t visit websites that contain explicit content or he doesn’t engage in sexting is by installing a cell phone monitoring app provided by The Tool Report. With such an app, you can prevent such sites from being accessed. In addition to that, you will be the first to know when a message is sent or received using your kid’s phone.

Your child’s cell phone is as vulnerable to being stolen as the one you use. For a start, you can never know where your child will go with his phone. If he happens to visit some unsafe neighborhoods, the phone can be stolen or snatched by bullies or goons. It’s very difficult to trace a phone that doesn’t have a tracker. It’s therefore recommended that you first install tracking software into your child’s phone before allowing him to use it when outside your home. With tracking software, you can use Geographic Positioning System to know where it’s being used and apprehend the culprit.

Sometimes kids seem to enjoy breaking the rules you give them. They will go to places that you have warned them about.  When you use software to monitor the phone that’s usually used by your kid, you can tell exactly where he is headed and swing into action to ensure that he stays safe when you are not with him. Other than going to places that are hostile or isolated, your child might get lost when exploring the areas that are adjacent to your home. If his phone has a tracking app, you can rescue him right away without having to call 911.

4. Know the People in Your Child’s Inner Circles

Without phone monitoring software, you may never know the people that communicate with your teenage daughter or son. Such strangers are more likely to prey on your child sexually. As a matter of fact, some of these strangers are actually grown ups that masquerade as kids. Since you don’t want your kid to start exchanging messages with a pedophile, it’s important you get to know the people that your kid keeps in touch with. You should consider meeting those kids and their parents in person so you can be at peace.