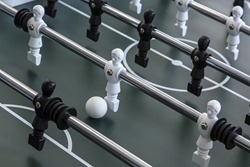 If you have just recently bought a foosball table or are now a regular at a sports bar where foosball is popular, then you must be very eager to learn how to play the game and start showing off to people. Who knows you might just become the next Messi or Cristiano Ronaldo of foosball. However, before you start imagining things and get swept up with the possibility of being the best in the game, you will have to learn and start from the basics of the game. To help you with just that, here are 5 tips to learn the game from our friends at YouFoosball.

Foosball, also known as table football is simply a tabletop version of playing soccer. Two opposing teams compete in order to shoot the ball to their opponent’s goal. Each team has 4 bars which is composed of a midfield bar which has 5 foosmen primarily used for passing, an attacking bar which is composed of 3 foosmen used for attacking and scoring, a defense bar composed of 2 or 3 foosmen which is for defense and a goalkeeper which has a single foosman which is the last line of defense.

The game played similar to soccer. A coin toss is done to start which team has the first possession, and from there on, the game proceeds until one reaches the pre-determined goal scores which are usually at least 5 points or whichever team leads in points until the time expires. The game can be played between two people or more depending on how many bars there are as there are also advanced foosball tables which have more than 4 bars per team.

The most basic skill that you should learn in order to quickly improve in the game is the grip. There are mainly two types of grip, the wrist grip, and the open palm grip. The wrist grip is the most common and basic grip in which you just wrap around your hand on the rod. Take note that you shouldn’t be gripping the rod too tightly as it will limit your turning power. It should just be enough to quickly switch between turning clockwise and counterclockwise. The other grip which is more convenient is the open palm grip. This grip is done by just touching the rod with your middle palm and rolling it. This shot has more speed and power compared to the latter. However, control is harder as sometimes you can over roll and end up spinning 360 degrees which is usually a foul.

The most basic skill that you should practice in your offense is passing. You should aim to pass the ball to the attacking bar and not just try to shoot the ball whenever you get possession even if it is at the 3 men defensive bar. As you practice passing, your shooting skills will also naturally improve and show up.

As for defense, the most basic skill that you should learn is the staggering or the synchronized push and pull of the rods. To make your defense harder to penetrate, you have to make sure that the maximum space is covered by your defensive bars – the foosmen must not be covering the same space. Also, you can try to position the two defensive bars in a slightly V formation. This way you will be able to cover sneaky passes and low shots.

And the final tip in order to get better quickly in the game is of course by practicing until you master each skill set. As you get familiar with the game and its different facets, you will be able to develop your own style and formulate the most effective winning strategies to win and shock your opponents.