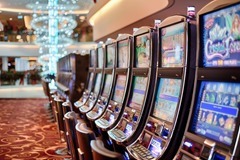 We all love an unusual experience every now and then. When we take risks on the reels, we may look at increasing our wagers and also getting pleasure from the slot’s gameplay itself. There are many slots that are designed to quench this insatiable desire for taking risks while providing you the ultimate in entertainment. Some of the popular adventure based slots include Ariana, Avalon, Tarzan, Thunderstruck, and Jungle Jim, amongst many others. Let’s take a look at each below.

Looking at the first slot, Ariana reigns from Microgaming with incredible graphics that brings to your device the blue aquatic adventure. This 5 reel and 25 paylines video slot has intricately designed symbols that resemble every creature you will find in an ocean. There are mermaids, sea dragons, and different species of fish and coral reefs which are stuck on the four edges of the game. The starfish represents the scatter symbol and Ariana has two special features in which you can win big through the full symbol stack and the free spins feature. In the full symbol stack you have to match symbols in order to win but this is simplified by the expanding symbols making winning a common feature in Ariana. The free spins feature is triggered when you are able to land 3 of the starfish icons. This game is a medium variance slot therefore regular wins are a possible. Ariana comes with a 240x multiplier and can be played from 0.25 125 coins with a RTP of 96.5%.

Avalon is another Microgaming powered slot game that possesses the high-resolution graphics which are identifiable with this reputable gaming software. The game is inspired by the Arthurian legend (King Arthur and the knight’s tale) and all its symbols are a reflection of all the artefacts that are reminiscent of King Arthur’s history. There is a treasure chest, two wild cards and a lady from the lake. The scatter and the wild are represented by the lady and the treasure chest respectively. Avalon is a 5 reel and 20 payline game and you can expect to earn larger return on your wagers as it is a high volatile game that comes with a RTP of 95%. The free spins feature gives you considerable shots at winning big and you can try many times as Avalon offers up to 12 free spins per session. For added value, Avalon comes with a 7x multiplier if you win in the free spins bonus round.

As far as adventure goes, there is one brand that will forever live in the minds of the old and the new, and that is Tarzan, centred on the central character from Edgar Rice Burroughs’s infamous TV production. Microgaming brings you this 5-reel and 40-payline video slot that you can play on the from as little as 40 coins per spin. You can win through a number of ways, combination symbols, sticky wilds, expanding wilds, Pick-a-Potamus bonus game, free spins feature and the bonus wheel. There is also a progressive jackpot and an 18x multiplier when you spin the bonus wheel. The symbols are all drawn from the jungle and include Tarzan himself, a leopard, Archimedes, shrike, chimp, a plum, an apple, an orange and a watermelon. The Tarzan symbol is the wild while the Archimedes is the scatter. Winning is almost a guarantee when playing Tarzan.

Thunderstruck II is powered by Microgaming and features 5 reels and 9 paylines. This is a great adventure game in terms of both the graphics and audio sounds. It’s also one of the most played games in Microgaming history due to two factors, it is highly entertaining and addictive and it pays big. In the free spins feature, every win is subject to a 3x multiplier and when you factor in the 30 free spins you get, you can fatten your pocket in a single session playing Thunderstruck. The game is inspired by the Norse mythology and its symbols include a Thor which doubles up as the wild, a Ram which represents the scatter and a brick, a trumpet and standard card symbols. This is a medium variance slot thus wins are pretty big.

Another great addition from Microgaming is the Jungle Jim El Dorado slot consisting of 5 reels and 25 paylines. As you can deduce, the game is based on the Eldorado. The symbols include the Jungle Jim logo and the Zodiac symbols which acts as the wild and the scatter respectively. You can begin your search for Eldorado in the South American jungle with just 0.25 to 25 coins and there are a number of ways to win. There’s a Rolling reels feature where all matching symbols are replaced by other symbols where you can start a sequence of continuous wins. The multiplier trail will increase the multiplier value for every spin from the initial 1x multiplier to a 5x multiplier in the base game or a 15x multiplier in the free spins feature. As you enjoy your search you will be glued to the screen by the beautiful transparent reels shining over a jungle background.