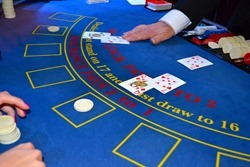 Blackjack is one of the most popular casino games in the world. One of the reasons of its popularity is the fact that a player can beat the dealer by implementing the proper strategy. While different Blackjack variations typically share the same objective of getting as close to 21 as possible to beat the dealer, side bets make the games even more exciting and offer bigger payouts which attract players to take a chance on them.

Here we will review the most exciting new blackjack variations that were created in recent years. However, you should know, that classic games are usually the best choice when it comes to house edge. Usually, new games and various side bets, have much higher house edge and lower chances of winning. Therefore, if you decide to give them a try, we recommend starting with low limit blackjack games and only after you tested the water, to increase your stakes.

Zombie Blackjack is a bit strange variant of the game developed by Scientific Games and Shuffle Master. Although it uses the word zombie in its name, you should not be scared of it. Instead, you can make use of its features and, just like a zombie brought back to life after death, get your busted or “dead” hand in play. This is what Zombie Blackjack offers, a second chance. However, whether you can take advantage of this feature depends on the dealer’s face-up card. To bring your original hand back to life after a bust, the dealer’s face-up card has to be a 7, 8, 9, 10, Jack, Queen, King or Ace.

Free Bet Blackjack is a Blackjack variant found in Golden Nugget Casino in Las Vegas. It is powered by Shuffle Master and its creator is Geoff Hall. Using the standard Blackjack rules and six decks, Free Bet comes with the house edge 0.57%. The game starts when players place a bet and get dealt two cards, just like the dealer who gets one card face-down and another face-up. Players can hit, stand, double down or split and surrender is not an available option.

Players are allowed to double down for free when they are dealt a hard 9-11 or after drawing three or four cards. When the player doubles down on a hard 9-11, the house places a bet next to the player’s bet. If the player wins, he is paid their original bet and the free token bet or 2:1. A natural blackjack pays 3:2 and free splits are allowed on all pairs except for 4’s and ten value cards. Double down and split can be performed on other pairs too, but they are not covered by free bets.

Triple Attack is a Blackjack variant offered at Harrah’s on the Las Vegas Strip. It uses eight Spanish decks with tens removed, like in the Spanish 21 variation. The player is allowed to triple their wager in phases and double their bet after they see the first card. The game starts when the player places the bet in the First Attack box. The bet can be doubled by wagering the same amount and placing the bet in the Second Attack box. The first card is then dealt face-up. An additional Third Attack wager is also possible even if the Second Attack bet has not been placed. It can be made after the player sees the dealer’s first card.

This award-winning Blackjack variant is also called “Blackjack on Steroids” as it offers multiple strategic options while keeping the game’s basic rules including the one that any 21 wins. A six-card hand that does not exceed 21, also known as Six Card Charlie, automatically wins. Players are allowed to double down as many times as they want even after splitting. Insurance payouts are big, standing at 2:1 and 5:1 if the dealer has a suited blackjack. Split and re-split is allowed three times. The player is allowed to draw as many cards as they like and all blackjacks are paid even money. Some tables may have payouts for the combinations of cards which can go up to 1,000:1 for a four-card royal flush. The house edge for this Blackjack variant is 1.17%.

Jack Magic is the variation of the game which includes the side bet based entirely on the jacks. The side bet is offered in the Blackjack games which use a continuous shuffle machine. The bet wins if jacks are found on three cards, the player’s two cards and the dealer’s face-up card. Payouts for three one-eyed jacks are as high as 500:1, three jacks pay 100:1 and two one-eyed jacks pay 30:1. Two jacks pay 10:1 and one jack pays even money.

This is a relatively new Blackjack side bet which comes in two versions at a cost of $5. Regardless of the version, the player wins on the dealer’s blackjack. The bet is based on the player’s and dealer’s first two cards, and payouts depend on the value of all four cards. The side bet is available in any classic Blackjack game which uses standard 52-card decks.

Despite being more than 200 hundred years old, blackjack keeps changing and evolving. On the other hand, as we mentioned above, most new games are designed to attract players with their big payout possibilities and special bet options, thus disguise the low payouts they offer.

In fact, one of the biggest mistake players make is choosing games with high house edge, while if they just moved one table to the right, they would have much better odds to take some cash home. Here you can find a nice article on the topic.