When the iPhone 4 launched, one of the big draws was mobile video calling. Labeled “FaceTime”, Apple introduced a new standard with its release, and FaceTime works quite well. Integrated with the phone contacts, it has never been easier to use a video phone.

However, FaceTime has its limitations that may make it a less than convenient choice. The biggest problem, which may not be Apple’s fault, is that FaceTime works only on Wifi, 3G is not supported. That means if you are out with your iPhone and find the need to video chat, you will either have to hunt down a WiFi hot spot or you will not be video chatting.

Enter the FaceTime options. There are now two apps in particular on the official AppStore that allows 3GS and iPhone 4 owners to video chat without the need for FaceTime. What’s more, they even work on 3G, which allows the user to strike up a call anywhere they have coverage. These two apps are Yahoo Messenger and Tango. So, how do they compare? Let’s take a look. 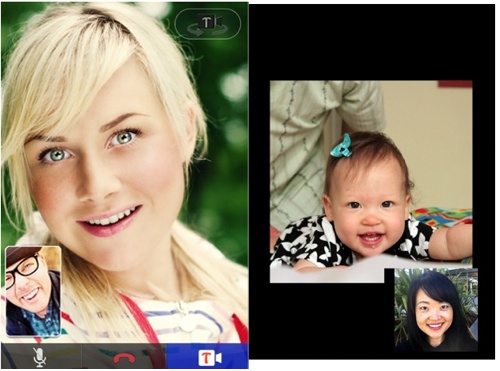 Both Tango and Yahoo Messenger deliver a decent video experience, but Tango has a bigger video display, as shown above, on he left. Naturally you will find that a WiFi connection yields the best results, but in practical uses the video over 3G was easily watchable. I made a call from a local park the other day and the video clearly showed the kids playing, and the action was smooth enough to easily follow. In comparison the videos were of the same overall quality, if not the same size.

Okay, this is where the differences shine. Or rather, Tango shines and Yahoo Messenger can be a pain. It took repeated attempts to get Yahoo Messenger to acknowledge that a call was coming in, and it would not handle the notifications correctly. Finally, by leaving the Messenger App forefront on the screen we could get repeatable results for testing.

Tango, on the other hand, always connected for us. Even if the receiving phone was off, a notification would alert the user, and with a swipe of the finger we were connected. At that point we are in an audio conversation, and touching the Tango button starts the video. I like the defaulting to audio just in case you don’t want to broadcast yourself in a given situation. Another cool feature is that Tango has a button for easily flipping between your front and back camera, and it alerts the other user while doing so. We were using a 3GS and an iPhone 4, and the software handled the different phones with no problem.

At first glance you would think that Yahoo Messenger would have a clear advantage since it could connect to desktop chat. And indeed we thought the same thing, and looked forward to trying out this feature. But, given the experience so far, we should have known better.

To start with, Yahoo Messenger on a Macbook simply refuses to work with video to the iPhone. The option is usually grayed out, and in the unlikely event that you have an active camera icon –  don’t get your hopes up – the phone will try to start a video conversation and bail out.

So, we tried it with the Windows platform. While we were less than pleased to have the Yahoo toolbar installed (we did opt out during Messenger installation, to no avail), it would have been forgivable if we could have used the messenger. Instead, the software repeatedly failed finding either the camera or the microphone on our test units. And, both of these use Skype on a regular basis, so it’s not exactly exotic hardware.

In the end we did get a video connection between the laptop and the iPhone, but audio was one direction only. And we had to initiate the call from the PC in order to connect. In a word, it was like we were messaging like it was 1999. It wasn’t pretty.

But as bad as the experience was, Tango has no desktop option. So, if you can get it working, Yahoo Messenger has the advantage here. That is, as long as you are not using a Mac.

As of this writing, Tango users on the iPhone can video chat with Tango users on an Android. And Tango is working hard to bring it out to all major smartphones. You can’t do that with Yahoo Messenger, at least not yet. Tango gets the Nod.

So there you have it – FaceTime alternatives Tango and Yahoo Messenger. While the woes with Yahoo Messenger may be ironed out with a later release (we hope!), for right now my advice is this – check out Tango if you want 3G video calling. You won’t be disappointed.