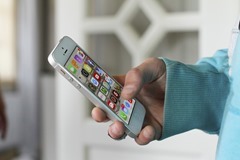 If you want to push your app to the top of the App Store, you should certainly consider the idea to get app installs. Ordering incentive installs by keywords is one of the most efficient promotion strategies. It will help you to get a firm position in the search query and improve the visibility of your app. Drawing on an example, we’ll prove to you the proficiency of this way of promotion and explain how to avoid the collapse of your marketing strategy.

Which keywords to choose to get app installs

As the first step, you should collect the keywords relevant to your app. For this, identify its category, main functions and features, and tech specifications. Write down all possible variants using brainstorm technique. Then, check manually whether the keywords are relevant by entering them in the search field. If you use the related keyword, other apps on the list will be similar to yours in terms of functionality. Also, you can analyze your competitors. Find applications from your niche and read through their title, subtitle, and description. There, you can pick up the keywords that may be relevant for your app as well. Another way is using the autosuggestion in the search field of the App Store. If you already have a core, the most meaningful word, you can enter it in the search and get some extra words to create combinations that will enlarge your keyword cloud. It could be noun+verb, adjective+noun, or noun+noun word combinations. After getting the idea of keywords that are suitable for your app, you start grouping them and selecting the ones that will bring the highest conversion rate. If you’re already ranked for some keywords, you can check their conversion rate in the console. Lots of developers make a crucial mistake and try to promote the app by the most popular search input, spending their whole budget, and getting zero results. For you to avoid this, we’ll explain why it is useless and how to conduct the campaign the right way.

What to avoid while promoting with keyword installs?

So, let’s have a look at an example. A developer wanted to promote his app by the only keyword “vpn” in France and be at the top 10 search results. He decided to get app installs for this specific keyword and wasted $2058 for ordering 11,400 of installs without getting any results after 14 days of promotion. Why did it happen? You should keep in mind that there are keywords that are extremely competitive as e.g. “vpn”. If you’re also selecting a popular region like the USA, it becomes even more challenging. Highly competitive or short-tail keywords contain one or a couple of words and require a huge number of installs. If you are funding the one keyword, you minimize your chances to get a high position in the rank because of the fierce competition. The main idea of promotion by incentive installs is to boost your app at least to the top 10 by several search inputs. After that it becomes visible and you start getting organic traffic. In case you choose the inappropriate keywords that don’t fit the intention of users or if the competition is too high, you won’t achieve this aim. You get a small number of impressions, and your promotion by keywords becomes a waste of time and money.

How to get app installs in a right way?

Alternatively, it’s possible to order installs for a couple of keywords that are less competitive but more specific and still have the same core “vpn”. They are called long-tail keywords. The difficulty of such search inquiries is lower, thus, they’re easier to promote. As the client already had the list of keywords that he wanted to work with, the ones with the highest conversion rate were chosen. He was at the top 2-20 by the search inputs “app vpn”, “vpn proxy”, “best vpn”, “fast vpn”. As he was already indexed by these particular ones, the aim was to improve his positions and get the idea of how many installs per day is required for that. As a starting point, it’s better to launch a testing campaign with 30 installs per each phrase for 2 days. The speed and dimensions of growth shows us which keywords need more installs and which should be deleted from the campaign at all.  As “vpn proxy” was the only keyword that didn’t show notional results, it needed the increase of the number of installs for it by 50% each day. After analyzing the results of screening, the conclusion was that the best way for promotion is a campaign lasting 5-7 days. In such cases, App Store algorithms can track the stable tendency and your app won’t lose positions after the end of the campaign. Nevertheless, it takes several days for the algorithm to recalculate your rank, so it’s normal that in the first 2 days the promotion brings no results. The app can even get down in the rank – as it was in this case. Nevertheless, the next few days brought both the lost positions and significant growth.

As you may guess, at the end of promotion by 4 keywords, the results were estimable better than by the only one at the first try. In the long run, the app got a +174% conversion and an increase of clickability. Summing up, the key principle is not to concentrate on the only keyword that seems to be the best option for you. Choose several keywords with lower difficulty that are more specific and order installs for them. Enhancing your position by a couple of search inputs, you become visible and can attract more customers. They could not be as popular as “vpn” but they surely bring you users. In turn, promotion by highly competitive keywords won’t give you results. To attract customers, your app should be at the top of the search list. But the competition there is too fierce to get there only with incentive installs. Start with planning your app promotion strategy. Get one from keyapp.top for free. Get app installs for  applications and rank them app by your most relevant words and phrases.