When Google launched the Nexus One in January, the “super phone” was destined to be a game changer in the mobile industry world. Not only was it to be one of the premier Android phones on the market, but even its distribution was revolutionary. Google was poised to sell the game changer directly to the consumer, bypassing the usual mobile sales channels. 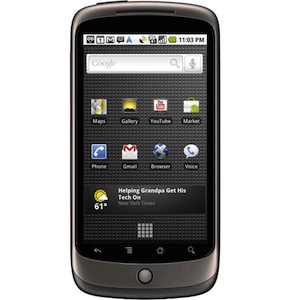 Now, fast forward to today, a mere 6 months later. Google has announced that the Nexus one is dead. The remaining stock will be sold at no doubt cut rate prices, and then the phone will likely fade to be a blip on a history chart.

But what happened? How could the arguably hottest technology company in the world release a phone based on the hottest operating system in the world not be a runaway success?

There are several arguments as to what caused the Nexus One to be an overall failure (despite being a very capable device). Many argue that the approach Google used to sell the phone – direct to users – failed to find a strong footing in its market. But anyone that has been on the web in the past few months has no doubt seen plenty of ads for the phone from the Google ad network. And given the money flow that is created from that network, it is hard to believe that the problem was a lack of exposure.

Some will argue that the lack of direct sells doomed the product. Without the initial ability to touch and feel the device for themselves, many people were hesitant to buy the phone on web information alone. At first, the only place you could buy it online was Google itself, not even from the carriers. Apparently a lot of people like to buy from the carrier site.

And finally, the buzz about the long lines found at launch were not to be found, mainly because it was simply not available locally. Without that powerful buzz of a local launch excitement – which other smartphone manufacturers really capitalize on – the word of mouth to drive sales failed to materialize.

But let’s step back and look at what happened since the Nexus One launched. The Android phone is now alive and breathing, and the platform is gaining new customers and new devices almost daily. The Android wave is swinging across the mobile market, and it is still picking up steam. Yet something had to start the Android market in motion.

So, let’s suppose, just for a moment, that Google was not as ill prepared to launch a new phone as it seems. Instead, let’s consider that Google had an ulterior motive. And that motive was simple – they needed to get the Android name as a smart consumer alternative choice out to the public, and from a trusted name. So what better name than their own – Google.

With that supposition in place, we would assume that Google was in for the short haul from the start. After HTC, Samsung, and others penetrated the market Google cracked open with the Nexus One, then Google could let the phone phase out as newer and better hardware gave consumers a stronger choice. But in order to do that Google would need to keep the carrier relationship for the Nexus one a weak one at best. In other words, exactly as they did.

Google would also want to make an in-store presence a slight one, something that could be pulled easily without impacting trade partners in a negative way. Again, exactly as they did.

Finally, if Google was expecting the Nexus One to merely be the “Android Consumer Meet and Greet”, then you would expect Google to completely exit the hardware business as the real hardware providers (HTC, etc. ) fully refined the platform. Mobile platforms move at a lightning speed, so six months should be enough time to see new and improved models on the market. And so Google has bailed. Do you see a pattern here?

Nexus One A Success

If this is the case, then we could describe the Nexus One as a mere link from a weak Android market to a strong one being built up by many smartphone manufacturers and the ensuing market. The Nexus One was then the connection for Google to that market.

Now this is the last piece of proof I will leave you with. Consider the name, Nexus One. If I look up the meaning for Nexus in the Oxford Dictionary of Difficult Words, I get this:

A connection or series of connections linking two or more things

I am now convinced that the Nexus One was not only a rousing success for Google, but that it was one of the most aptly named products ever to be on the market. Way to go Google.

5 comments for “Did Google Have An Ulterior Motive With The Nexus One?”