When Apple released the iPhone 4, there were many new toys onboard that made the smart device an interesting purchase. Of course, most of us know about Facetime and the new dual cameras, as well as the highly touted high “retina” display. But there was one new piece of hardware onboard that could have been easily overlooked, and that is the shiny new gyroscope.

From a long-term view, the gyroscope being made available may have a bigger impact in how we use smart devices than any other new addition to the platform. Of course, since the iPhone already had very sensitive accelerometers it would be easy to overlook its importance to devices, and developers are still only starting to use the new hardware. 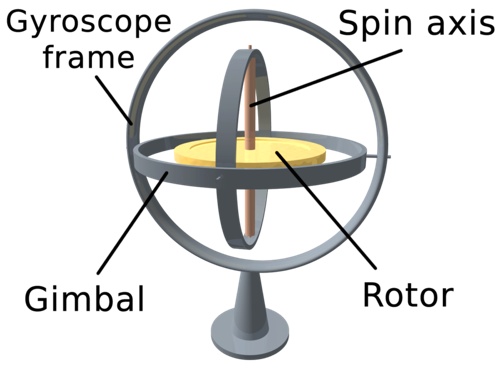 So, let’s take a look at the new smart device gyroscope, and see why I think it is so important to the future of smart devices.

How is a Gyroscope Better Than An Accelerometer?

First, let’s briefly discuss what exactly a Gyroscope is, and how it differs from what was already in place, accelerometers. Accelerometers measure linear motion AND gravity at the same time. There is no way to decouple the gravity effects from the measured motion without approximations. This fact would be limiting by itself on what we can do with the recorded data, but accelerometers simply do not measure rotational movement. Think of accelerometers as measuring acceleration in a given direction, as the name implies.

Unfortunately, very little on the human body works in a straight line. That is because humans are comprised of joints that rotate from a central axis. From an elbow to a knee, the movements of the human body are rotational by nature. When you move your hand straight in the air, it is because you are simultaneously doing multiple arcs with your elbow and shoulder to get a net effect of forward motion.

Now, the gyroscope measures rotational motion, not linear acceleration. If you were to slowly turn your body, the accelerometer would not catch it. However, the gyroscope could tell you exactly how far you turned and where you turned, from your initial position. What’s more, the gyroscope is immune to the effect of gravity, so exact changes can be read directly regardless of position. In a word, the gyroscope fits the way the human body works.

But in real world terms how would a gyroscope make our smart devices better? Let’s take a look at a few examples.

We have already stated that human beings are built to move rotationally by nature. So it should not be hard to imagine that a much finer degree of control could be possible by reading a gyroscope. It is possible to obtain the exact amount of rotation a hand (or device, in this case) has moved with such a device. Compare this with getting control input from an accelerometer, where we are guessing our position from how fast it moved for x amount of time.

Plus, consider the scenario where you are playing a flight simulator and slow, subtle movements are best for craft control. A good developer can keep track of the movements with an accelerometer, but if you simply move too slowly to register a clean motion the control will suffer. Now, with that gyroscope in the device, the developer can read very subtle position changes regardless how slow you make them. The net result is a fine degree of control that up to now was not possible on a smart device. Is it any wonder why aircraft use gyroscopes and not accelerometers for guidance control?

Another great application for gyroscopes in a smart device is with dead reckoning. Consider the scenario where you are using GPS to find your favorite spot, and there is heavy tree coverage or power line interference. You may intermittently lose your GPS signal, but once you have a direction locked in the gyroscope can keep you on track to the target. In fact, a gyroscope can be used in tandem with other components to take you right to a multiple turn target from a known location, something a compass could not manage. Such capabilities, when coupled with the right software, makes a typical GPS seem very lacking in its ability.

Sometimes when you go to take a picture those rotational joints tend to move a bit as you squeeze a finger (or in this case touch the screen). A gyroscope can record the exact rotational motions – think a shaky hand here – and can be used along with correctional software to remove the jitters from the picture. This is nothing new, since some high-end video cameras have used a gyroscope for this purpose for a while now. But gyroscope-based image stabilization is new to your smart device. The end result is a consistently better picture from your device than was previously possible.

While it is not exactly in popular use today, a gyroscope in our smart device allows us to make fine gesture actions for control of other devices. For example, imagine controlling a cursor on your TV using your device. The gyroscope allows for different gestures, such as easily rotating virtual knobs with a fine degree of control. This closely mirrors what you now find on a Wii console, and it should not come as a surprise that the Wii Plus upgrade from the original Wii controller was the inclusion of a gyroscope.

There are more ways that a gyroscope inside of a smart device could be put to use, and it is literally only limited by the imagination of the developers. While we are now only starting to see apps built around the gyroscope, the next couple years should really see some interesting applications. By that time, and like the GPS chip of today, we will wonder how we ever managed without having a gyroscope in our pocket.

3 comments for “Why A Gyroscope In An Accelerometer-Equipped Smart Device?”