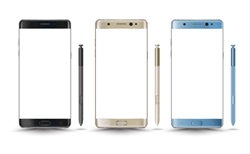 Samsung isn’t the first multi-national corporation to face a serious recall on a top product and it certainly won’t be the last. In an industry where innovation is the name of the game, companies like Samsung always push the limits of current technology. While the Galaxy Note7 recall has been a blow to the Samsung name, the company itself will ultimately outlive it. Here’s a look at how Samsung has minimized the impact of this recall.

When reports first came in that a select few Galaxy Note7s were overheating to an extreme degree, nobody knew why. The number of reports marked the malfunction as 0.1 percent of the Note7s sold, but due to the severity of the malfunction a full recall was initiated. Samsung found, on inspection, that the malfunction was present in a small number of batteries used in the Note7. Furthermore, two manufacturers were used for Note7 batteries and the malfunction was only found in batteries from one of them. The recall has been one of the largest in history due to the popularity of the Samsung product. While this maybe be a dark time in the companies history, its commitment to excellence has been admirable.

Samsung has worked with major carriers such as AT&T, T-Mobile and Verizon, as recalled devices have flooded in. Early in the recall, most carriers offered loaner phones (in the form of a Samsung J Series) for those who traded in their Samsung Galaxy Note7s. As of September 21st, however, all major carriers now have a one-for-one exchange policy so that all Note7 owners get the safe, state of the art phone they wanted. You can even go into brick and mortar T-Mobile stores if it’s easier for you. There is one caveat in the return, however. T-Mobile cannot help you transfer your contacts and data due to Customer Product Safety Commission guidelines.

How This Affects Future Recalls

If a company is innovative and prolific, they will inevitably face a recall on products gone haywire. Samsung is the most recent example of a major recall, and many consumer advocates say their response will be a playbook of how major recalls dealing with millions of units can be implemented. First responses from consumers were filled with confusion, as some Note7s caused damage to both homes and cars. This has lead Samsung to add additional safety guards on Note7 batteries. When any company recalls millions of devices, it takes to all avenues of media. Samsung has made us of Twitter, newspaper ads, emails, the Samsung app and much more so that each and every potentially dangerous phone is recovered and dealt with.

How did this affect the value of the company? Samsung’s stock took a dive when first reports of the recall hit news sources, but since then, much of its value has recovered because of the company’s swift response to the situation. While the recall is still ongoing, you can now get your hands on a new and improved Galaxy Note7. The kicker of the recall is that the phone itself isn’t the problem at all and the batteries are made, not in South Korea, like the other hardware, but in China. While Samsung has dealt with much of the fallout, the company continues to investigate why batteries from the Chinese manufacturer overheat so easily.