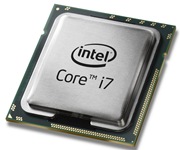 You’ve got a brain, right? Sure you do! And so does your computer. But instead of a soft, squishy blob of neurons and axons and synapses, your computer has a small square chip about the size of a Triscuit cracker that does it’s thinking. As much as I wish all computers and robotics were powered like Krang from the Teenage Mutant Ninja Turtles, with a human-style evil brain creature inside operating the controls, this is not the case. Instead, a CPU (or microprocessor) is the computer’s puppet master responsible for ensuring everything runs smoothly.

So how does one tiny little chip control every aspect of your computer’s operation? How does it know what to do, and how does it process the data that goes through it? Well, I’m here to tell you, as simply stated as possible.

Slap on your highway boots, Daddy Bojangles, it’s time for some high-tech information made easy.

CPU stands for central processing unit. The name is pretty telling and lets you know that this piece of equipment serves the most crucial role in your computer’s operation. Every component in your computer is connected to the motherboard, but the motherboard wouldn’t know how to communicate with all the pieces without the CPU. All roads lead to Rome, and Rome happens to be a little square computer chip.

The first microprocessor was built in 1971, which is way before the general public knew anything about computers. People were still using rotary phones, watching The Flip Wilson Show and jamming out to How Stuff Works: RAM” article from a few weeks ago.

The last few paragraphs have been sort of technical, but there’s really no way around that. However, it may help if we have a little metaphor to put the processor’s actions into a different context. Everyone loves a good metaphor.

Every component in the computer, including the video card, CD drive, etc. have an “address.” Say that mouse click we mentioned earlier was intended to open a file on the hard drive. The information being sent to the processor is something like “bring me the file located at 322 Green St. on the first hard drive, which is sitting at 201 Fatty Cheeseburger Ct..” The file has a certain place on the drive, the drive has a certain place within the system, and the address is how the CPU finds it and sends it back to the program.

Considering the amount of operations your CPU is doing at any given time, you can imagine the number of logic gates require to process everything you’re doing. If you can’t imagine, then I’ll tell you – hundreds of millions. That’s how many processors live on that single, tiny, one square inch chip within your computer, laptop, whatever.

On a basic level, that pretty much sums up how a CPU handles your information.

Time for a quick sum-up for those who don’t like to read:

Got it? Maybe. The processor is an extremely complicated little piece of technology. It’s almost impossible for our giant brains to fully comprehend how this tiny computer brain can house so much stuff and perform so many operations millions of times over ever second. But as long as you understand the basics, you should have a better grasp on just what that little chip is busy doing all day long.

And remember, even though your CPU may be infinitely smarter than you at math and logistical processing, and may make you feel as though your brain is an inferior piece of hardware, if you ask a CPU to give you a hug, it will never provide.

5 comments for “How Stuff Works: A Computer CPU”