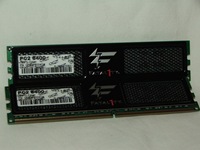 RAM is one component of a computer’s anatomy that most people are familiar with. Tell someone your computer is running slow, and they often reply “maybe you should add some RAM.” Whether they really know what that means or not, it’s often the first suggestion made – and can commonly be a good one.

While people understand that RAM helps your computer run efficiently, not everyone knows exactly how it works. More of it means you can do more simultaneously, but not all people can explain why, or tell you exactly what the RAM is doing in your system that gives it that edge. Let’s take a look at exactly what RAM is, and how it works. 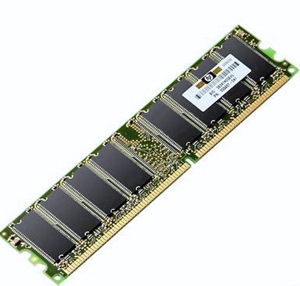 Random Access Memory, or RAM, is a crucial element in any computer. One of the most inexpensive pieces of hardware inside your machine, it is also one of the most important, and having an appropriate amount to meet your needs makes a world of difference when going about your daily computing activities. These lovely little rectangular sticks are the most widely known form of memory and are one of the easiest pieces of hardware for the average person to access and upgrade.

The name Random Access Memory refers to the fact that any memory cell on the RAM stick can be accessed at any time, or randomly (OMG!). Not all memory works this way. Other types of memory have to be accessed in sequential order (serial access memory), where information is stored in a linear fashion and has to be retrieved as such.

RAM is where active data is stored from the programs you are running on your machine. This is why that initial conversation happens where people suggest more RAM if your computer is sluggish. The more RAM you have, the more software you can run at once without bogging down your machine – technically. Each piece of software on your computer requires a certain amount of your RAM to operate efficiently. When it gets filled up, your RAM struggles to keep things going. The computer will have to go to the hard drive for program data, which is slower. RAM exists so that the computer doesn’t have to rely on the hard drive. Every time something is loaded, opened or change, it is saved in RAM for easy access. Important stuff we have here.

Looking at a stick of RAM, you can’t see much that tells you what’s really going on in there. You see all those crazy circuit paths and a series of black squares. What’s really inside are millions of tiny, microscopic capacitors and transistors. It’s like having a tiny power plant in your hand, for those of you who like to feel a grandiose sense of power. Each of these capacitors can either be electrically charged or not electrically charged, and that’s the foundation of how RAM functions. These transistor / capacitor pairings form bits of data. These bits have binary values of either 0 or 1, just like everything else in a computer. In layman’s terms, each capacitor / transistor memory cell is either charged or neutral, on or off, active or not active, 1 or 0. And that’s all they can do. Imagine, only having one function in life…

These banks of capacitors work together to save data a little more complicated than “on” or “off.” For example, say we have a bank of eight capacitors. Four are on, four are off, in an order like 01000111. That translates in computer lingo to “G” – yeah, it takes all that just to save one letter. Do that millions of times over, and you can store enough letters to mean something – like all the active data for your software. Each charge is a bit. Eight bits are a byte. One million bytes is a megabyte. One thousand megabytes is a gigabyte. These days, most computers have at least three or four gigabytes of RAM. If you have three, then you have enough space to store 2,579,803,776 of those 0 or 1 values. That’s quite a few. It’s possible to find computers that can house five or six times that amount of RAM. As things progress and software gets more and more complex, more RAM is needed for it to function well. Fifteen years ago, a computer would have had less than 1 megabyte of RAM.

Technically, when a memory cell is charged in the RAM, it doesn’t stay that way very long. Really. Just a few milliseconds. See? I told you it wasn’t very long. What makes RAM dynamic is its refresh rate, which is the rate at which the RAM recharges an active memory cell. The CPU or Memory Controller in the computer have to recharge a RAM cell thousands of times every second because the silly thing can’t hold its charge any longer than that. This is required to keep the RAM active, and keep your programs running full speed. I guess only having one function in life could be annoying after all.

This is why it’s important for dynamic RAM to continually recharge thousands of times per second. If it didn’t and the charge suddenly vanished, it forgets what it was holding, and you’d lose everything you are doing. This would be a big 0.

The RAM’s memory cells are seated in a series of rows and columns. DRAM charges particular transistors using this layout as a grid, and it knows where every available unit rests. As the RAM seeks to recharge itself, it scans the grid and reads each transistor’s charge. If it reads below 50 and should be charge, it fires it up some more. This is done so fast that our measly human brains can’t even comprehend it literally. The process is done in nanoseconds, or billionths of a second. It may take 50 nanoseconds to complete the recharge, which means it will be performed an unfathomable amount of times every second. 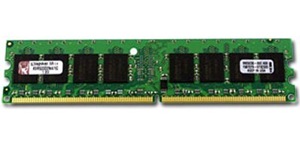 Newer forms of RAM, like DDR RAM, gets clocked twice per cycle. Twice as much data can move in every cycle, making it faster. Most modern computers use this type, as faster is better. But you knew that. Despite the format, as RAM evolves, the basic principles of how it functions remain mostly the same.

The rest of the circuits in the RAM stick are there to see read the rows/columns, track refresh, read the signal (0 or 1) from each cell and assign the charges. These other circuits are how data comes back from the RAM and is used by the computer. Little metal pins on the bottom of the RAM stick connect the RAM stick’s data to your motherboard, and from there into the other components. On a grand scale, the rate at which all this happens, when bits are sent to the CPU (and the number that can be sent per second) are the bus width and bus speed. Now you should understand what’s happening inside in reference to those names.

All of the above explains why you lose RAM data when your computer is turned off. No power = no charges = no data.

There are many other types of RAM, but when people generally refer to RAM, they are referring to the common dynamic sticks. If your computer is slow, you may want to consider adding some RAM. This is as simple as sticking a new RAM stick into the slot on your computer’s motherboard. There is no software to install, no configuration to be done, and no hassle. You just pop it into the slot and ensure the clips lock. This two second procedure could give your computer better performance – and generally will. The type of board and connection method changes as time goes by, so as long as you ensure you are buying RAM compatible with your motherboard, you’re good to go. 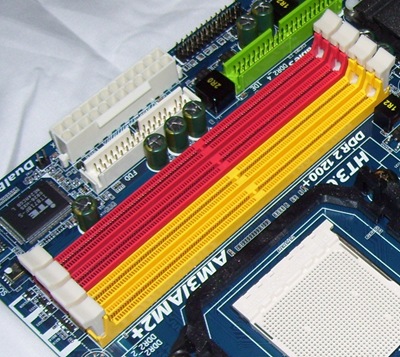 Talking about RAM is as complicated as it is simple. Remember that your computer’s RAM stick is only one type of memory. Almost everything you use has some sort of memory system inside – from your cell phone to your clock radio, and even the magnetic strip on your debit card.

So when your computer is acting slow, a solution very well may be to add more RAM. Hopefully now you can understand a little bit about why that is true, based on an understanding of how RAM works and how giving your computer more RAM to use allows it to store more data and keep your computer running more efficiently.

7 comments for “How Stuff Works: Ram”