Recently on technogog I had a little fun jousting with David K from Mobility Digest about the pros and cons of the iPhone versus Windows Mobile devices. In my article I was asked to play the role of an Apple fan boy. I think I did a good job after all the comments we received.

The reality is that I am not an Apple or Microsoft fan boy and I see both the good and bad in both platforms. Apple’s iPhone 3G while a great product and one I truly enjoy using has plenty of shortcomings. With the release of the iPhone OS 3.0 Software Update, Apple attempts to correct some of these issues and make improvements to their immensely popular cell phone. Improvements range from new features such as Voice Recording and Spotlight search to incremental upgrades to apps such as Messenger and Stocks.

One of the features lacking from the iPhone since its inception has been the ability to cut, copy and paste. Well Apple finally kowtowed to the masses and added this basic element to the iPhone. To invoke this feature just double tap or tap and hold the screen and select blocks of text, then hit the pop up tab to select whether you wish to cut, copy or paste. All I can say to Apple is “what took you so long!”

Cut and paste is immensely useful and a necessity for Smart phone devices such as the iPhone. Sadly Apple’s implementation can be frustrating at times. Generally the cut/paste/copy tool pops up by accident with errant double taps on the screen. In addition tap gestures used in other applications such as the zoom tap in Safari sometimes cause the cut/paste/copy tool not to appear when desired. 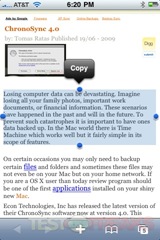 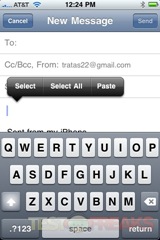 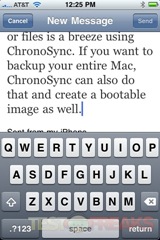 Spotlight is the search feature brought over from OS X. Basically it allows you to search all of your contacts, email, calendars, and notes, as well as everything in your iPod. To activate it just press the Home button from the main screen (the first page of your Home screen). This is another handy feature that can be found on many other Smart phones. You can change the search result order by heading into the Settings/General/Home/Search menu. Unfortunately if you don’t wish to use this element there is no option to turn it off. 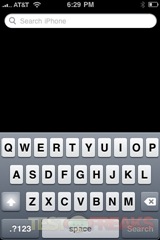 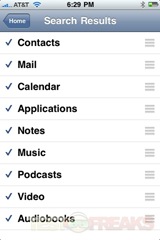 Talking with some colleagues, most of them are especially enamored by the new SMS capabilities found in OS 3.0. It has been described as “solid” and “faster”. Messages can be forwarded or individual messages deleted. Now you can say I never got that message and make it look legit.

In the past an error messages would wipe out your previous input requiring the need to retype the message; now the message is stored with the ability to resend at a later time. 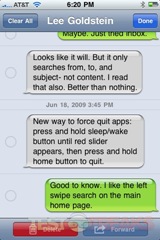 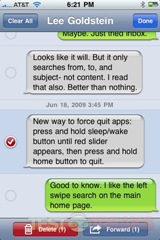 If you live in the United States then MMS for the iPhone is not yet available. The iPhone 3.0 update is MMS capable, so once AT&T gets their act together then information such as pictures, contact info, audio files, Google Map locations and more can be sent via the Message app within the iPhone 3G. Supposedly it will be available in late summer; probably for an added fee of course. Damn you AT&T!

The next feature I could live without; that is the Landscape Keyboard. It was designed to provide more work room to type in the Mail, Messages, Notes, and Safari apps. Typing on it in the Landscape orientation is definitely more comfortable with fewer errors than in the Portrait view. 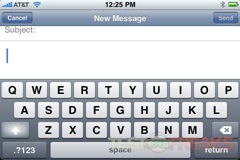 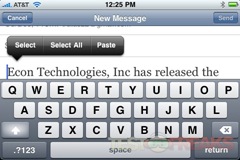 An unwanted side effect of this feature is the screen re-orients more unnecessarily if the iPhone is help at the slightest angle from the portrait position.

My personal favorite feature of the iPhone 3.0 OS is the CalDAV/WebDAV integration. In plain English this means calendars from Yahoo and Google can be used in conjunction with the Calendar app. With the economy in the tank paying for Apple’s MobileMe package seems silly when there are free alternatives available. Having the Calendar app sync with the Google Calendar via cloud computing is incredibly useful. Here is a link to a simple tutorial – Sync Google Calendar on iPhone OS 3.0. 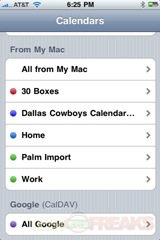 For the Starbuck lovers and the McDonalds connoisseurs, now AT&T hotspots are automatically logged onto when in range of the hotspot Wi-Fi signal. That means you can surf the web at Wi-Fi speed while waiting for your double espresso latte or wolfing down your Big Mac Extra Value Meal.

The Bluetooth on the iPhone was severely crippled before this latest OS update. Apple has enabled the A2DP Stereo Bluetooth profile on the iPhone 3G. Imagine a world without headphone cables; sounds like a pretty nice place to me. Apple also now allows iPhones to communicate to one another via Bluetooth peer to peer. This means multiplayer games may become a reality in the near future.

Another feature unavailable to the denizens of the United States due to the restrictions of AT&T is the ability to tether your iPhone’s internet connection via Bluetooth or USB. This is great for connecting your laptop to the web when you are out of range of a Wi-Fi signal. Too bad we can’t test it out in the States.

The iPhone shake has been implemented in the new OS for erasing mistake while entering text and shuffling song while playing music. Another implementation of the shake function is the Shake to Shuffle option in the iPod portion of the iPhone. However, if you like to work out I would advise turning off the Shake to Shuffle option unless you want to change songs every few seconds on the Elliptical machine. 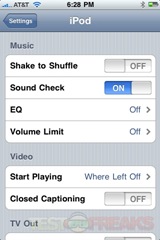 A pet peeve with browsing on Safari was the inability to AutoFill information. Well now in Safari this feature can be enabled under the Settings/Safari screen. If you have a YouTube account, you can also log into that from within the YouTube app. 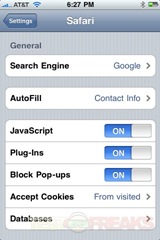 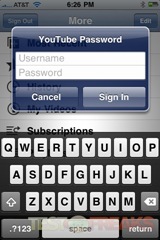 Apple has made serious strides in improving its iPhone line with the release of OS 3.0. Some features have been a long time coming such as cut/paste and copy and Bluetooth Stereo while others features are designed to make the iPhone more versatile and functional such as the auto Hot Spot log in and the CalDAV integration. The iPhone is still not the end all be all of cell phones but it is making strides in the right direction. I guess I will be hearing from the WinMobile camp soon…….