The smart home is all the rage right now, isn’t it? As a reader of Technogog you’ve probably already invested in a lot of the tech that’s out there but we thought we’d pick out a few favorites just in case you missed them, and also take a more balanced view of the scene as a whole. You see, believe it or not there are people out there who actually have their doubts about the wisdom of all this automation…!

These little gizmos are relatively mundane but probably one of the most useful tools out there. By allowing the home owner to see all the energy used by the home on a daily basis, and to watch the cost mount up, it encourages more economical living. Not only does this save $$$ but it also helps save the planet. …Way to kill two birds with one stone!

Why oh why is sleeping so darned difficult? Ironically it’s partly because we’ve got too much technology going on in our lives interrupting those circadian rhythms; but never mind as technology itself has plenty of solutions. Sleep monitors are very handy but one of the most novel devices available at the moment is this rhythmic light system from an innovative company in France. By emitting a light that the troubled sleeper focuses on, the mind and body gradually wind down quite naturally without needing any medication and the agitated self is carried pleasantly into sleep. Of course the problem could lie elsewhere (pun very much intended) in which case a company like Bedstar has great tips on catching those Z’s. 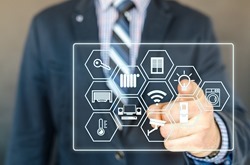 Now this is one of the most worrying areas because for all that there’s something reassuring about placing one’s trust in non-human hands, there’s also a risk involved. You see the more we go over to internet based technology the more risk there is of it getting hacked. It’s all very well to control all the critical elements of your home from a smart phone, but if some malevolent character hacks into it then the whole system could be undermined. The comical side would be washing machines and dishwashers turning on without being asked, the less amusing side would be the obvious burglary.

The likes of Amazon’s Alexa are revolutionizing the home as well as producing a plethora of ridiculous videos. However, if you’re yet to get on board then you’re missing out as these digital assistants really are very handy. Once you’re over the novelty of being able to chat to an AI and ask embarrassing questions, the best use for these devices tends to be small tasks such as checking traffic conditions before you head out, setting a quick timer whilst cooking or getting a track that pops into your head to play, just like that.