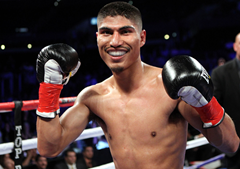 If there is one thing you can say about Mikey Garcia, it’s that he does not lack ambition. His decision to vacate his IBF lightweight title last year to pursue a welterweight clash with Errol Spence was a bold step for a fighter who already had multiple world titles in four different weight classes.

The result was a comprehensive victory for Spence, a 12 round unanimous decision in favor of Spence, with Garcia failing to win a single round on any of the judges’ scorecards. However, rather than be put off by that defeat, Mikey Garcia is ready to fight at welterweight again, with his namesake Danny Garcia lined up as the opponent.

Make no mistake, that crushing defeat at the hands of Spence will have bruised the ego of Garcia, a fighter who had never tasted professional defeat before that night in Arlington. But the prospect of a Danny Garcia v Mikey Garcia boxing match will whet the appetites of both fighters, and of boxing fans around the globe.

The main question Garcia’s defeat to Spence raised was whether or not Mikey, through seeking success in the welterweight class, is aiming too high — reaching towards a goal so alluring that its unattainability is ignored. Garcia has been one of the finest fighters we have seen in modern times in the lighter division classes, annihilating all before him en route to claiming those multiple world titles across four divisions.

So why abandon the lighter classes when they have given Mikey so much success? The answer lies within the attributes that have brought Garcia all those titles, the daring, ambitious nature of his personality and the cold-hearted, clinical nature of his boxing. This is a fighter who does not simply want to plateau, to wring the lightweight and flyweight divisions of all the glory they can give him. Instead, Garcia has ambition to match his record thus far in his career, and welterweight represents the next step towards securing a legacy that will see Garcia go down as one of the sport’s greats.

Perhaps it’s not the case that welterweight is a step too far, but it is almost certainly true that fighting Errol Spence for the IBF welterweight title was a step too soon. Spence could count on his greater height, his more expansive reach, and crucially his experience to dominate Garcia. A more seasoned welterweight fighter may not have wilted in the way Garcia ultimately did.

In Danny Garcia, Mikey will face an opponent more evenly matched to his own abilities. Danny stands an inch and a half shorter than Spence, and his reach barely outstrips Mikey’s. This fight could offer Mikey a chance to truly acclimatize to the welterweight class, to find his feet as it were and prove that he is not punching above his weight.

Danny’s record over the last couple of years is a mixed bag, and that will give Mikey an edge, but the most interesting aspect about this clash of the Garcias is how Mikey will bounce back from that disappointment in Arlington against Spence. Responding to a defeat is a test he has never faced before, but with the world watching and the fire burning within him to reach new heights in his career and taste new flavors of success, you can bet that Mikey Garcia will take some stopping.