Many responsible parents try to make sure that their children access the web in a safe manner, away from the threats of online predators. But how about that smart phone, tablet, or even the popular iPod Touch – are they taking the same pains to protect their children from threats on these devices?

In the recent past, there was little to fear along the lines of Internet dangers from small portable devices such as phones and MP3 players. But as the devices have grown in their capabilities, so have they grown in potential threats. In fact, more people access Facebook and other social media sites on their smart device than on a regular computer.

Parents do face a hard time keeping up with the speed in which mobile technology is moving. But with a few tips, they might find it much easier to keep loved ones safer as the device in their pocket expands to full web access and beyond. Let’s take a look at our favorite tips on mobile Internet safety.

Explore the Parental Options on the Device 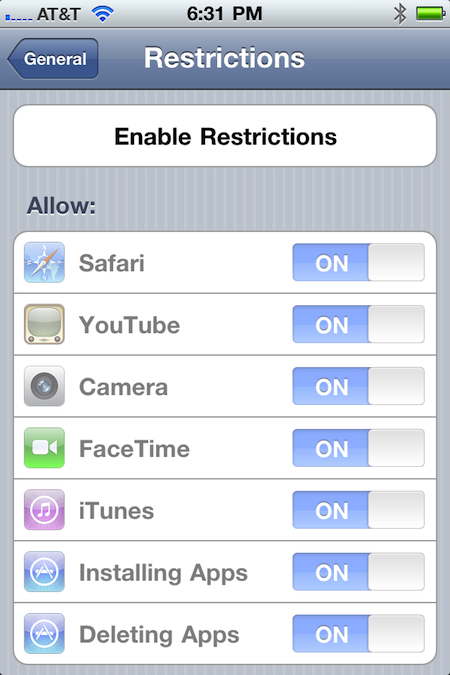 A lot of mobile devices today from reputable companies include some form of parental control, with a custom passcode to enforce the settings. For example, iOS devices from Apple include a “Restrictions” section under General that allows you to detail various aspects of access on the device. The first page of restrictions (screenshot from the iPhone, above) allows you to turn on the restrictions and set a passcode. From there, you can select which built-in apps you want to allow to run. Here it is easy to deactivate FaceTime so that potential live video streaming using that service is avoided. You can also stop the installation of new apps that may circumnavigate restrictions or create new threats. 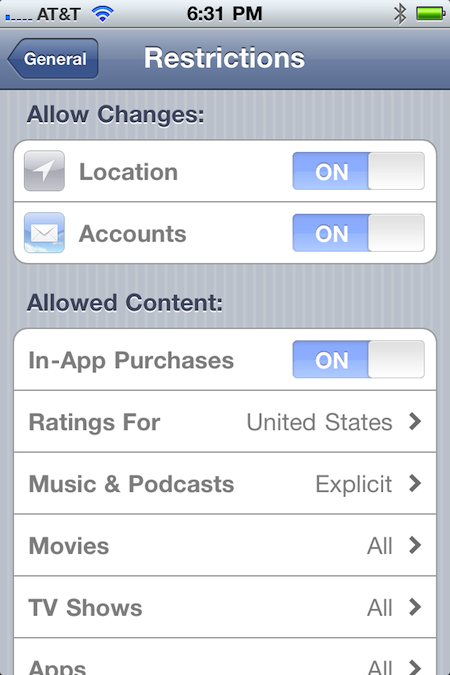 As shown above, the next screen of settings allows the parent to turn off location reporting. This could be important since many apps will now allow the user to “check in”, which shows their current location. The last thing you want to do is to let potential predators know exactly where your child is. 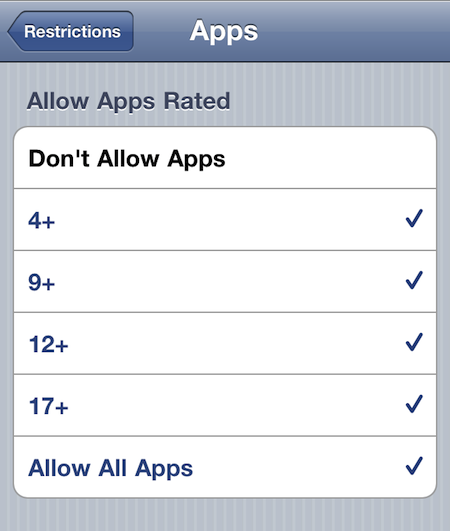 You can also restrict certain email accounts, and even block music and video that have an age restricted rating. Movies can be allowed based on the given rating, and explicit music access can be blocked. But more importantly for the topic at hand, the age rating can restrict the apps themselves (as shown in the screen shot above). Third party Browsers that have general access to the web have an older age rating, so this makes it easy to block a lot of potential Internet dangers through Apps.

The last thing you would want to do with a child is to give them unlimited Internet access with a capable mobile device. As logical as this seems, many parents overlook the fact the default browser does exactly this – it gives unlimited access. Instead, look for and install a child friendly browser for their needs. Also, be sure to block access to the default browser. As you can see in the screen shots above, this is easy to do on iOS devices. Most other popular device families offer similar functionality, but you have to remember to turn the restrictions on.

Now, if your mobile device does not allow the open browser to be blocked, then consider not letting a child use it. An open browser with no restrictions is simply too much of a threat. Unlike home solutions that block blacklisted sites from even reaching your home, a mobile device may connect directly to the provider, bypassing the home safeguards.

Even with a device that does use the home network (such as an iPod Touch), the mobile nature of the device means that it may be on many different networks throughout the week. It is almost impossible to verify that all of those networks are safe. So, when it comes to mobile devices, the safety features are either on the device itself or they should be treated like they do not exist. Of course, there are exceptions, such as mobile devices that are used only at home, but these are definitely the minority.

It used to be that games were played on a home console without interaction of others. You would load up the game and play, without the need for any connection. The next area of growth was in games that allowed people to play together through the Internet. But today we have taken games from just an interaction to a whole social experience. And it is not just happening on computers and consoles.

Many mobile device games allow you to join and interact in social media sites that connect with and explore the games. But it might not be a good idea to allow a child unfettered access to any social network, especially one that is so deeply involved in gaming. After all, this would be a potential target for online predators. 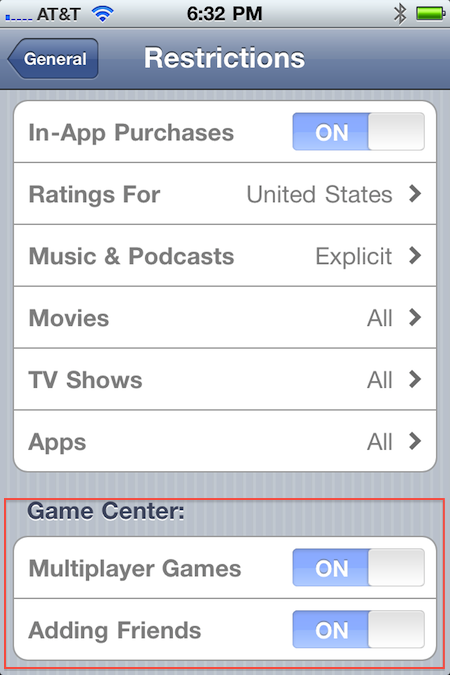 For iOS devices, you can restrict the access to Apple’s Game Center social component from the restrictions menu (as shown above, highlighted in red). You can selectively limit multi-player gaming or just the addition of new and potentially harmful friends. Other gaming social networks offer similar restrictions, but be sure to check all of the game titles currently installed to see which networks they interact with. There is no real way to know the potential stranger interaction without verifying on a per title basis.

New apps can be installed in only a few minutes, and many offer access to areas of the web that would best to be avoided. From games that access different game sharing networks to apps designed to access social media sites; the next open gateway to the Internet is just an installation away. For this reason, be sure to restrict new apps from being installed without supervision. We touched on this already, but new app installation is probably the second biggest threat to a child’s mobile Internet safety since they can be designed for ease of use and yet connect to any network. The biggest threat is an open browser, naturally.

While it is impossible to be 100% sure that all threats are removed when a child has access to the Internet, a little research and parental involvement goes a long ways. When it comes to selecting a mobile device for underage users, be sure that some form of parental control is on the device. If it is not available, I would strongly suggest looking elsewhere. After all, the average mobile device today is more powerful than the average desktop of just a few years ago, and they are definitely better connected. Oh, you never know the places they can go.