There is no doubt that Apple is selling more MacBooks than ever before. In fact, Mac sales are triple what they were just 5 years ago. And with 50 million Mac users in the wild, Apple must be doing something right. They know how to place their product.

One of the points that Apple is using to sell Macs these days is that it is simple for new users to pick up and run with a Mac. A very successful campaign ad drove that idea home and back again with actors John Hodgman as a PC and Justin Long as a Mac eschewing the simplicity of all things Mac. 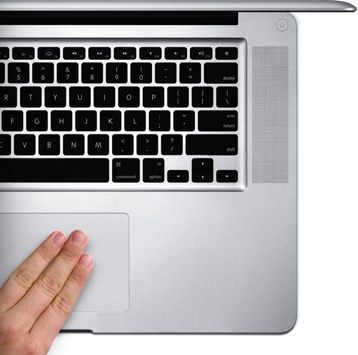 But that simplicity may have just gotten a bit more complex recently. With the overwhelming success of all things iOS (that’s the iPhone, iPad, and iPod Touch), a multi-touch user interface is figuring in a big way into Apple’s user interfaces going forward.  And it is not just the touch screen enabled devices that have a multi-touch interface playing a pivotal role.

After all, not everything works best with a touch screen. Steve Jobs, in the recent Apple “Back To The Mac” event, pointed out that desktop applications are not built for that kind of input. In fact, holding your hand out on the screen is downright non-ergonomic over a long day. Instead, Apple is focusing on another area that is more human body friendly.

That is, multi-touch on Macs is becoming expanded through the trackpad itself. This is not new, since all MacBooks made this year have multi-touch capabilities. And a recent update in Snow Leopard expands on this capability, even down to inertia sensitive two-finger scrolling (which I really like, by the way) and four-finger app switching. In fact, if you go to System Preferences now, you will find options for one, two, three and four fingered screen gymnastics. You can now pinch to zoom and even rotate pictures through the trackpad. (If you want to see the current multi-touch Mac implementation in action check out the video at the Apple website.)

But the multi-touch craze apparently doesn’t stop there. During the event, one of the key points for the next great OS X version, Lion, is “More advanced use of multi-touch gestures”. In a word, you haven’t seen anything yet. Or so I paraphrase. One thing seems to be certain – multi-touch is now a permanent fixture in the use of a Mac.

Not So Simple Control

While power users and those not quite so powerful may welcome the ability to do wonderful things with any combination of finger count and swipe, what about the new Mac user? You know, the new people that Apple is so actively courting with their “simplicity” ads. Instead of using a mouse that goes “click”, suddenly we have a lot of choices for making things happen on the screen, and it depends on not only where you touch it, but also how you touch and how fast you do it.

The novice computer user may find it a bit intimidating when they try to click the trackpad with two fingers by accident and get a right click. When Grandma drags the pinky or heel of the hand across the trackpad and it switches to the Expose’ view, will the windows flying off the screen have her freaking out?

Such otherwise predictable screen behavior can be intimidating to the new user. In fact, many of those new Mac users have never experienced a trackpad before, little alone a multi-touch version of it. And if you try to explain what a particular finger combination will do, it may get lost in the overall shuffle.

The user can get overwhelmed, leaving them very cautious about any trackpad interaction. Which is unfortunate, since that is the main user interface for today’s Mac. You end up with an environment that is not exactly the most conducive to learning, and just when you needed it most.

Another aspect of “simple” that could be lost here is the simplicity of a user’s preferred input device. I have associates that have a favorite mouse, and the device has survived several computer upgrades. Now that mouse would suddenly seem an ill fit, since the only touch options it has is one finger at a time. You would be missing out on a lot of what the interface offers, especially after Lion arrives.

But perhaps that is a case of obsolete equipment, just like you would not expect a PS/2 mouse to still fit a laptop today. In time other manufacturers will no doubt fill the third party void, but for now your non-Apple multi-touch Mac control options are very limited, to say the least. But I will say this – for the first time, I find myself actually preferring a trackpad (with all that it can now do) over a separate mouse. The thought never even enters my head during use – multi-touch is that good once you get used to it.

In the end, it will probably be a question of the time it takes for the user to become acclimatized to the multi-touch control paradigm. Perhaps the question of which finger does what and how is not that much to ask of Aunt Betty after all. While I still see the learning curve greatly extended over that of a simple mouse, maybe it is manageable. But one thing I would caution Apple about – make sure that the Genius Bar at the local Apple Store is well stocked with very patient people who like explaining the difference between a two finger right click and a three finger drag on a regular basis.