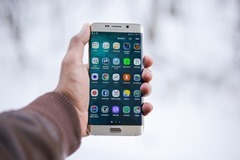 The year 2020 was very surprising for the most downloaded apps as due to the coronavirus pandemic and the shift for everything to be online, there was a huge array of apps that did incredibly well that haven’t been as popular in recent years. Now, though, some of the suggestions may still come across as surprising – the most downloaded apps are those that consumers would expect to see.

It is surprising that all of the apps downloaded tend to be used for social media or video sharing, as opposed to those used for games. There is a huge array of mobile games available to download, some for free and others that can get a little bit more competitive such as those on online gambling sites, but it appears these have not been used as much as those used for communication. With that in mind, let’s take a look at some of the most downloaded apps of 2021 so far.

Throughout lockdown, TikTok became a worldwide phenomenon and that is a trend which is carrying over into 2021. This is no surprise as by April last year, the app managed to surpass 2 billion downloads. What was originally seen as predominantly as platform for Gen Z is now embraced by all generations.

With more people stuck at home at the start of this year, the app has been frequented even more as social media users take on trends, dance, do pranks and play music over TikTok.

Facebook is the number one app in the entire world, so it’s not surprising that it has found a spot on this list. An incredibly well-known app anyway, it has been used a lot more recently as while people have been stuck at home, they’ve used it to connect with family and friends that they’re unable to see face to face.

Just below Facebook is Instagram, also an app that many people have been using in order to communicate and connect with friends and family that they otherwise would not have been able to see. This popularity was only added to thanks to the introduction of Instagram’s newest feature, Reels. In direct competition with TikTok, Instagram introduced a feature that allowed for longer, full screen videos, which people have been using a lot since the start of 2021.

Another app used for communication, WhatsApp currently has approximately 2 billion users worldwide. Though it is not the most popular in the US, across the rest of the globe it is the most used messaging app by a healthy margin. That popularity is reflected in its place on this list.

Telegram has been another incredibly popular app so far in 2021 which people have been using in order to send photos, videos and other documents. It currently has a monthly usership of roughly 500 million active users because of the fact it has cross platform availability, which makes it very convenient not just for individuals but also businesses and large organization. There are a plethora of marketing opportunities that come with Telegram as the images and videos shared can provide information on new products or services that businesses offer.