Virtual Reality technology has swept across the consumer market in recent years, and gamers are loving every second. For those who have their hands on a VR headset, you’ll already know just how revolutionary this technology is and could continue to be in the future, but for those who aren’t as familiar with what the technology is like – what are you waiting for? From in-home theatre experiences, to a new take on education, VR could revolutionize the way we use technology in our everyday lives, not least in the gaming industry. 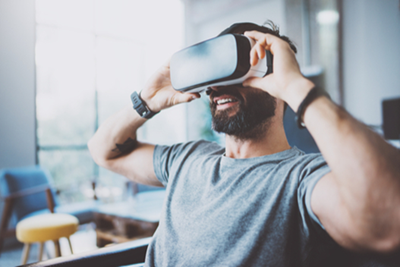 What Are The Current Trends?

VR is still in its infancy on a consumer level, but if there’s one thing that we learned from CES 2018 and the huge VR updates on display, it’s that companies are gripping onto the technology with both hands. The question is, however, what are they doing with this technology?

When someone says ‘VR headset’, the majority of the world will probably think about the Oculus Rift, the Samsung VR or maybe even Google Cardboard. However, with improvements in technology have come a whole host of lesser known, but even better VR headsets that can provide a just as enriching experience as any of the well-known counterparts. Razor, Fove, Homido and BOBOVR have all got headsets on offer, and each has its own unique selling point, so it’s worth investigating the entire market if you’re on the hunt for a headset of your own.

Virtual Reality hardware and software is all about providing the user with an immersive experience, and so it was only a matter of time before haptics came into play. Vibration technology is making everything from light touches to full-body assaults feel so much more real – within reason, of course. Everything from gloves and smaller wearables, to full sized vests are in development or already on the market ready for players to pick up and use for optimal immersion.

VR is bringing a brand new level of innovation to how we play online as a whole, but in particular with how we interact with and play games of chance and skill, like Roulette or any of our favorite card games. VR develops a truly immersive environment where players can benefit from a real-life experience while they’re practicing for the live run. It enhances the holistic experience – as we’ll see further on below.

The use of games in education isn’t a new concept either, but the use of VR in learning can take this method to new heights. Students from school-starting age, to those about to graduate university can benefit from the immersive technology to help them learn absolutely anything. From the human body, to how the universe works, students can embark on whole new experiences all from the safety of the classroom. This kind of teaching can make the information stick, as they’re more likely to be paying attention than simply by taking notes.

Now that we understand just how VR is faring currently, predicting just how it could affect how we game in the future is something that experts across the world are already focusing on as far as developments are concerned. So, what exactly are we likely to see?

This might seem like a bit of a given considering the fact that Virtual Reality is immersive by nature, but we’re talking about traditional games. Our long-time favorites could find themselves being adapted for VR use, as well as recreated from scratch with brand new stories and new styles of play. With some games already having VR-supported software despite being designed for PC or mobile, for example, this could become common practice amongst most console games in the future. Currently, this kind of gameplay could still mean needing to use a controller, but with the ability to move your head to look around.

Atmosphere is everything in a game, especially with the sheer number of adventure and first-person shooters currently on the market and as a result, developers are always looking for new ways to utilize graphics to make their games much more atmospheric – VR basically does this for them. However, while this could help these developers to improve upon games they already have, it could also mean that new games have a new focus on all things atmospheric and fantastical. VR gives us the opportunity to explore the impossible, so who wouldn’t want to utilize this to its fullest?

The industry is already awash with different gameplay styles, but it’s no secret that the industry needs to start providing many, many more if they want to expand VR to its full potential. Exploration might become more of a focus, with stories having to base themselves around what the player choses to do as opposed to whether or not they reach a specific outcome to progress. The story will write itself around the gameplay, as opposed to the other way around. The storyline, the emotion in the story, the sheer beauty of the surroundings and so much more will need to become a focus, especially where gameplay is concerned, in order to let VR soar.

The future of gaming will undoubtedly see VR being used on a larger scale, but the extent to which this is the case will depend on how developers respond. Games could see a focus on atmosphere, made better with better headsets, and educational gaming could have a deeper effect than ever before. All that’s left to do now is watch this space – and maybe invest in a VR headset!