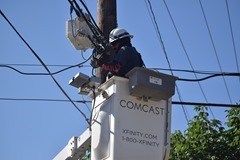 With the world full of so many technologies, it often gets confusing to understand certain terms or to differentiate between them. No matter where we are, whether at home, outside in a restaurant, or working in the office, we are always surrounded by screens. When it comes to TV entertainment, we see online streaming services being very common these days, but cable TV and regular TV are still a part of the American household. Gen-Z and the younger lot are more fond of online streaming services to watch their favorite content. Yet, the older viewers love watching cable TV.

Though most TV viewers may not be able to distinguish between terms like broadcast TV or cable TV, there is much difference between the two streams of entertainment. As similar as they sound, cable TV and ordinary TV can be confusing. So, first, we need to be clear about both types of services. Once you know that, you can better apprehend their pros and cons. By knowing the differences between the two, you can better evaluate if cable TV is better than ordinary TV, and which type of service is perfect for your needs. Having said that, let us now proceed towards this agenda and try to decipher more about cable TV and ordinary TV. Let’s get going:

What is meant by Cable Television?

Cable TV was launched as a commercial company in the 1940s. Ever since its creation, it has gained immense recognition and popularity from the 1950s until now. Initially, it was basically a coaxial cable delivery system that enabled viewers living in areas with little or no access to TV signals over the air to get any local or other variety of channels. Later on, FCC imposed certain restrictions on its availability and accessibility, and heavily monitored the cable industry in the 1960s. With time, the cable regulations became more flexible.

The industry kept growing significantly and aced forward to the heights we see today, in terms of improvements in infrastructure, incorporation of technological advancements, and growth of the cable industry in general. The viewers could watch hundreds of new channels along with the local channels and choose cable TV plans with channel line-ups and prices that matched their entertainment needs and budget.

It was back in 1973 when HBO or Home Box Office first came into existence as the pioneer pay-tv network across the country and instantly became a favorite. It is recently also among the leading streaming television content providers.

What does Ordinary Television mean?

Ordinary television, on the other hand, is a medium of TV entertainment in which signals are transmitted in the form of radio waves over the air instead of through coaxial cables. A TV antenna is required to receive these signals. Ordinary TV, also referred to as broadcast TV, has comparatively fewer channels than cable TV. It also requires a specific antenna to be able to access them. Due to equipment malfunctioning, rough climate conditions, or any such issue, the channel visibility can be affected. The picture quality reduces and the images might appear blur. In some instances, it cannot be visible enough to be watched.

When it comes to advertising, your decision for choosing between cable TV or ordinary TV matters. Both cable TV and ordinary TV have their own sets of benefits and target audiences.

For a viewer, advertisements of both cable TV and ordinary TV might seem the same with no considerable difference. However, from a business perspective, there is a considerable difference. Broadcast or ordinary TV, being the most common type of TV entertainment across the United States, comes at a zero cost to the viewers. Most of the broadcast channels are commercial channels and they rely on ads as their main source of revenue.

Cable TV channels, on the other hand, are private networks and they rely on the revenue from the users in addition to the revenue generated from the aired commercials. The cable TV channels do not use public airwaves and charge a certain monthly fee for accessibility.

Moreover, when it comes to channel count, cable TV seems a lot ahead in the game. Cable TV offers a much-diversified channel lineup while broadcast channels might be limited. When you subscribe to a cable TV plan, you can select among the wide range of channel varieties and opt for the channel list that coincides with your entertainment choice.

When it comes to cost, ordinary TV seems like a winner, since cable TV subscriptions come with a certain price tag. Therefore, as long as you have a good antenna to receive signals, you can enjoy broadcast channels free.

The aforementioned discussion concludes what ordinary TV and cable TV bring to the viewers and how they differ in functioning. So, now you are in a better position to understand which of the two options would you want to avail of in order to quench your entertainment needs.