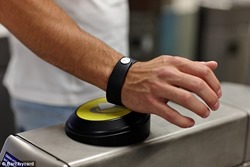 So much in technology is separated by the tiniest of margins. There is very little to separate the top tier tech companies of today, as Apple, Samsung, LG, Google and Microsoft all make fantastic devices that satisfy consumers. So how do we choose which brand to go with? What is it coming down to that helps us pick out one brand from the other? Many would say convenience plays a decisive factor in this day and age, and making payments with the swipe of a wrist device is a game changer that will have Apple and Google revising their payment divisions.

The wrist device in question is neither the Apple Watch nor upcoming competitor smart watches, but wrist bands that are being released by companies such as the bPay band by Barclay Card in the UK and PureWrist in the US. Both bands are simply worn on the wrist with no buttons and dials, and when held up to a contactless pay point administers a payment. It’s as simple as that. The concept works on a pre-paid basis, so the device cannot go into credit, and when funds run low on the wrist band you simply top it up with an amount of your choice via an app. 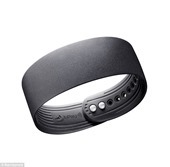 The selling point of these wrist bands are the pure convenience they offer, with spokespeople for the companies arguing that you now no longer have to fish around in your pocket for a wallet or a device to make a payment. Certainly, the sky does seem the limit, as when one thinks of the ease of paying for public transport with these bands the excitement does start to set in. Stadiums are now also looking into the concept, installing contactless pay points at food and drink stalls for visitor convenience where fumbling over wallets while standing in a crowd is certainly not ideal.

One might ask what happens if the device is stolen off your wrist? In the UK contactless payments are limited to £20, so the thief cannot ring you up with a monumental bill. The mini-card in the wrist band can also be cancelled just as easily as cancelling a credit or debit card, and one must remember that the wrist band cannot go into credit.

But where does this leave mobile devices attempting to step up their foray into the contactless payment sector? Indeed, Apple has invested substantially in their Apple Pay application that requires you to hold your Apple device to the contactless payment point. While Apple will see wrist bands as a threat to consumers currently using their mobile phones and tablets to make payments they should be having no such fear in regards to their smart watch. The Apple Watch also has Apple Pay functionality, and when held up to the pay point only requires a double click of a side button. So the question begs, will consumers make their decision based on a double click? It is highly unlikely, as although the Apple Watch costs substantially more than the wrist bands, they offer a lot more in terms of overall functionality.

The wrist bands are currently only used for making payments, while smart watches open consumers up to a whole consignment of functions. While public transport is ideal for contactless payment smart watches will make it just as convenient as wrist bands to make payment and also offer entertainment for travellers while in transit. The Apple Watch currently makes apps accessible and also hosts Wi-Fi, so once having paid for your transport you can sit down and enjoy entertainment on your watch, whether it be your latest fitness stats, listening to music or playing an aGamingClub.co.uk.

A flood of competition is now expected to hit the market, as companies are already looking to diversify payment wrist bands. American Express and Jawbone are currently working on a fitness band which will also sport payment functionality, while Google has Google Wallet and Samsung is mirroring Apple with their very own Samsung Pay. Very soon contactless payments will be available through most banks, credit card companies, tech companies and possibly web wallet companies looking to expand from online payments.

However which way you look at it, the future of physical payments does seem to lie on the wrist rather than on mobile devices, as in our 21st century past pace lives people are likely to choose convenience when it matters.