I tried and tried and tried to connect the two to each other and the error just kept popping up and I was getting very frustrated with it. I tried connecting over wi-fi and the p2p, neither worked. A little background I guess, the HTC Media Link HD can connect to your phone directly to your phone or via your router, meaning phone to router to Media Link.  Yeah none of that worked. I got it to work for a few minutes but the AT&T pop-up appears nagging me about getting the mobile hotspot and shuts the Media Link app down automatically.

One expects an accessory to work, especially one that is featured in a special promotion for a brand new flagship phone?! Am I right? Of course I am. I have to wonder why neither HTC or AT&T tested this at all. I love HTC, I’ve had many of their phone, that’s one of the reasons I got the HTC One, but it seems someone dropped the ball on this. I think it was both in this case.

I ended calling AT&T after about an hour of trying to figure it out myself. I never call tech support unless I absolutely have to as it’s an excruciating experience pretty much every time. When you call AT&T you can’t connect to their tech support, you have to go through a customer service rep first. For about half an hour I argued with the customer service rep, I was very nice about it but she told me that a tethering plan is needed to use the Media Link. NOT TRUE! I tired to explain how the phone connects to the Media Link HD several times and then she still turned around and told me if I wanted to use the Media Link I’d have to change my plan to one that includes tethering. Nowhere on the AT&T site or HTC website does it mention a mobile hotspot or tethering plan is needed for the Media Link.

Here’s a screenshot for you from the AT&T site: 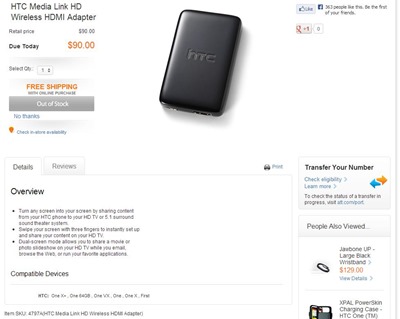 So after discussing this with them they were ready to just end the call, but I asked for a number for their tech support and she told she couldn’t give me a number for their tech support but could connect me. I was connected and the woman I spoke to in tech support was very helpful, she confirmed that tethering is NOT required to use the Media Link HD and admitted that since it’s a new phone and accessory she didn’t know much about the device.. To my amazement the AT&T tech support rep actually called HTC tech support and we were all on the call together.  AT&T didn’t know anything about the issue. The HTC rep I spoke with tried to walk me through the troubleshooting that was in the actual guide for the Media Link and I cut him off and told him I did all of that, and I walked him through what I did to get it to work. He confirmed I was correct and it should work so he put us on hold and went to speak to someone else. He came back on and told us HTC knew about the issue and confirmed to me that it is a known problem and again tethering is NOT needed to use the Media Link HD. The HTC rep told me they are working on the problem but of course gave me the canned excuse about how it’s a new device and there’s bound to be issues with the launch and blah, blah, blah. Really HTC, is that the best you can do for your flagship devices?

So the good news is that they know about the issue, the bad news is that they don’t know when it will be fixed. I was told to just keep checking the HTC support section of their website for any updates. The AT&T tech support rep told me that they may actually call me back to let me know when the issue is fixed. That’s nice of them actually.

So if I wouldn’t have requested to speak to AT&T tech support I would have ended up paying more for a plan with tethering. I have to wonder how many other new owners of the HTC One and the Media Link HD have called in and just listened and changed their plan when they really didn’t have to.  I know a little bit about tech so I knew how the device worked and how it should work, but I’m sure the average user would most likely just accept what that first level support agent told them and they’re spending more money than they need to right now sadly.

AT&T tech support is pretty good, they admitted they didn’t know what to do, and that the other rep was wrong and went even farther and called the manufacturer tech support for the device!

HTC tech support is not exactly the greatest, considering he didn’t know anything about the issue until he went and talked to someone else. One might think it would be an important thing for tech support to know about something like the HTC One and the HTC Media Link HD.

So if you happen to have tethering or mobile hotspot on your HTC One and you have the Media Link, check your data usage as it appears it doesn’t use wif-fi as it’s supposed to and it tries to use AT&T data. That’s not a good thing at all in my opinion.

I’ll try and keep things updated as I learn more, but as of now there is no official word from HTC as to when a fix will be released and they’re not sure if it will be released through HTC or through AT&T.