Yep, the long awaited sequel or should I say combination is finally out. Angry Birds Star Wars is here. I grabbed it but haven’t had the chance to play it yet, but I will be later today for sure. It’s Star Wars and it’s Angry Birds, what’s not to like?!  Official PR below for you.. 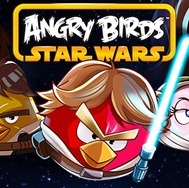 “It’s a banner day for us,” said Peter Vesterbacka, CMO of Rovio Entertainment. “This is our best Angry Birds game yet, and we’re excited for our fans to finally meet Luke, Leia, and the rest of the gang! But it’s more than just a game launch: we think fans are going to just love the new animated trailer and the Angry Birds Star Wars products, sure to be a big hit this holiday season.”

The game follows a plucky group of Rebel birds in their fight against the evil Imperial Pigs. Fans will use the Force, wield a Lightsaber, and blast away Pigtroopers on an intergalactic journey from the deserts of Tatooine to the depths of the Pig Star — where they’ll face off against the terrifying Darth Vader, Dark Lord of the Pigs!

“We can’t wait for fans around the world to experience the fun of launching the Angry Birds characters into the Star Wars universe,” said Colum Slevin, Vice President, Head of Studio Operations for Lucasfilm Ltd. “This is the kind of creative partnership that has helped Star Wars remain vibrant and beloved for over 35 years.”

With more than 80 levels in iconic locations like Tatooine and the Pig Star, the game features hours and hours of engaging gameplay, all new gameplay mechanics, the ability to level up birds, free updates, plus lots of secrets and hidden goodies. Fans can also train in the “Path of the Jedi” in-app purchase to become a Jedi Master.

Rovio and Lucas celebrated with their fans in a Google+ Hangout on Wednesday evening, counting down to the launch at midnight Pacific Time.

← You Can Now Get DC Comics on Kindle Store, iBookstore and the NOOK Store
Review of Noctua NF-A9x14 92mm PWM Fan →