What can I say about the Archos G9 tablet? Well not much really until I get one in my hands. I can tell you that it can do 1080P video on its 8” screen, and that it has a 1.5Ghz dual core CPU inside and that you can get up to 250gb of storage in it. It’s running Android Honeycomb and comes with the regular Google things like Talk, YouTube, Maps, Navigation and Calendar. Pricing will be starting at $299 for the 8gb version, and I guess that;’s not too bad for a higher end, name brand Android tablet. I would prefer the size be a bit bigger, 9.7” or 10” would be nice. 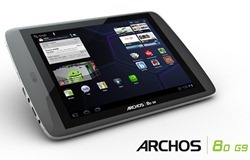 With its 8’’ G9 tablet, ARCHOS will be the first to market with a dual-core, Android Honeycomb 3.2 tablet under $300 featuring an OMAP 4 processor with an ARM Cortex dual-core A9 at 1 GHz for $299. Pushing the technological boundaries even further, the ARCHOS G9 “Turbo” will be the first and only Android tablet in the market under $400 to use the OMAP 4 dual-core processor up to 1.5 GHz, which gives it 50% more raw computational power over its 1 GHz competitors.

To give you more space for your media and apps ARCHOS G9 tablets are available with flash storage and 250GB hard drive storage capacities. Using an intelligent caching system on the hard drive versions, your 250GB G9 will feel as fast and responsive as a flash device but gives you storage space to spare.

Wanting to give users the best of both worlds, ARCHOS paired the Seagate® Momentus® Thin hard drive with a dedicated 4GB flash caching system. This ARCHOS engineered hybrid solution offered on all ARCHOS G9 hard drive tablets is designed to limit spinning and to keep the drive powered down when not in use, which will protect it when on the go as well as preserve battery life.

The ARCHOS 80 G9 tablet featuring a 1 GHz dual-core processor will be on pre-sale starting September 20, 2011 on ARCHOS.com with the following recommended retail price: