Yeah it’s $199, so technically that’s under $200 right? I’m not sure why companies think that pricing something like that is a good thing really? I mean do they really think that $1 matters much to people? I mean by advertising something with that ‘99’ price at the end, do people really think it’s a bargain? It’s not just Archos, most every company out there is guilty of doing the same thing. It seems I was off on a tangent there and got off subject. The new Archos 70b Android tablet features 3.2 Honeycomb with 8gb of storage with 512mb of ram and a 1.2ghz CPU. The screen is 1024×600 resolution and of course it’s capacitive. 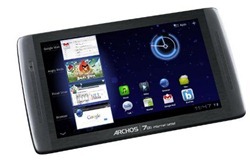 ARCHOS, an award-winning innovator in consumer electronics, announced today the upcoming availability of the first android 3.2 ‘’Honeycomb’’ tablet under $200, the ARCHOS 70b internet tablet. The new ARCHOS 70b IT is an enhanced version of the ARCHOS 70 IT Gen 8 that features an upgraded capacitive touch screen and a powerful processor at 1.2 GHz.
The ARCHOS 70b internet tablet runs Android 3.2 Honeycomb, Google’s full suite of mobile applications with Android Market, giving users access to over 300,000 applications such as games, books, social media and news. With Honeycomb, users will have faster and smoother transitions between different applications, and more intuitive navigation to and from home screens.
Very slim and light, the newest version of the ARCHOS 70 internet tablet Gen 8, offers the best performances in terms of portability, immediate internet access, multimedia, apps and affordability.  This new version has a higher resolution capacitive screen (1024 x 600) for vibrant colors and crisp clarity and has doubled the RAM to 512 MB for a smoother web experience and more efficient multi-tasking.
This connected mobile device with a sublime user interface, 3D Graphics accelerator and Wi-Fi connectivity, also comes with a full pack of connected apps such as a web browser and email application, HDMI output and Micro SD connectivity.

With this enhanced Android tablet, users will benefit from:
•    An affordable price starting at $199 for 8GB
•    Smoother multi-tasking and a faster web experience thanks to the upgraded RAM
•    Brighter colors with a high resolution capacitive screen
•    Android 3.2 Honeycomb, the Android version designed for a tablet
•    Access to a full array of apps with the Android Market and its 300,000 apps such as news, eMagazines, eBooks, social media, games and more
•    A full multimedia experience with upgraded multimedia ARCHOS apps for video and music
•    HDMI output, giving users full access to their Android experience on their TV including all the pre-loaded apps, video playback, 3D games, photos and all the Android Market apps
Availability & Price
The ARCHOS 70b internet tablet will be available in stores starting in January with the recommended retail price of $199.